It was on March 27, 1980, that the first plumes of steam escaped from Mt. St. Helen’s. Just over seven weeks later, the mountain experienced a 5.1 earthquake which caused the north side of the volcano to slide away and triggered the largest debris avalanche in recorded US history.

“The magma in St. Helen’s burst forth into a large-scale pyroclastic flow that flattened vegetation and buildings over 230 square miles. More than 1.5 million metric tons of sulfur dioxide was released into the atmosphere. On the Volcanic Explosivity Index scale, the eruption was rated a five, and categorized as a Plinian eruption.

The collapse of the northern flank of St. Helens mixed with ice, snow, and water to create lahars (volcanic mudflows). The lahars flowed many miles down the Toutle and Cowlitz Rivers, destroying bridges and lumber camps. A total of 3,900,000 cubic yards of material was transported 17 miles south into the Columbia River by the mudflows.

For more than nine hours, a vigorous plume of ash erupted, eventually reaching 12 to 16 miles above sea level.  The plume moved eastward at an average speed of 60 miles per hour with ash reaching Idaho by noon.”

This information is, of course, widely known. As a young reporter for the weekly Eatonville Dispatch in South Pierce County, Washington, that first puff of steam was part of a rather amazing life experience.

At a distance of only 47 miles – as the crow flies so to speak – from the mountain, Eatonville residents soon noticed fine layers of ash dusting the community. Week after week I wrote stories about the impact of the ash fall and provided reports in the paper as to all the latest activity.

The most interesting event, however, began two months earlier with a rather odd story told to me by a young couple who were driving home from Ashford to Eatonville one winter night. They claimed that they were followed by three bright orbs which sped up and slowed down in concert with their car. These young people were visibly upset by the incident and believed they had been followed by UFO’s. The photo here is NOT from that event but is illustrative of what they described. 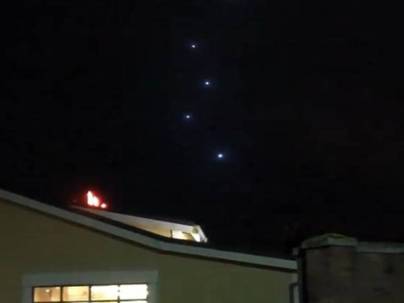 Another theory, however, was posited in late March in conjunction with the increased earthquake and volcanic rumblings. And that is the phenomenon known as Earthquake lightning. It is believed that lightning can be triggered by earthquakes and that, perhaps, the presence of these lights was associated with the impending eruption of Mt. St. Helen’s.

Also from the Infallible Wikipedia:

To this day I’ve never quite known what was or was not the truth with this account. I do know that when I was in the area where the phenomenon occurred in the two months prior to Mt. St.Helen’s awakening I was hyper aware and constantly scanned the rearview mirror for strange lights. I never did see any. 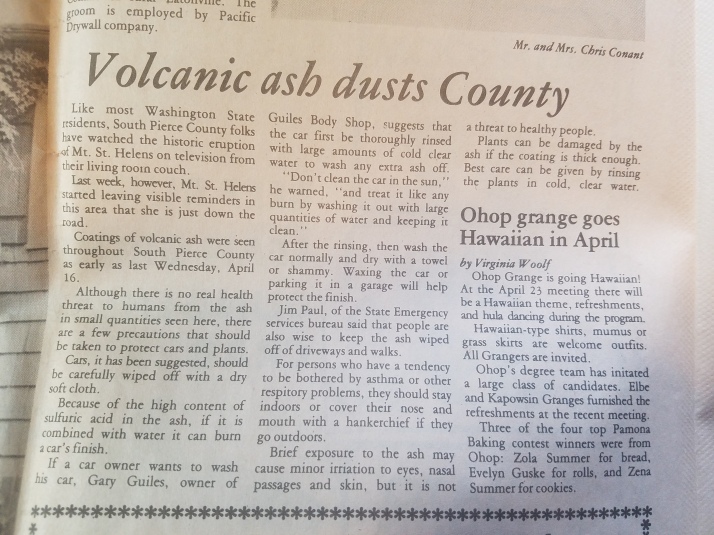 It was not until the April 23rd issue when I reported the first dusting of ash in Eatonville. Less than a month later the mountain blew.

As always, a couple of links: