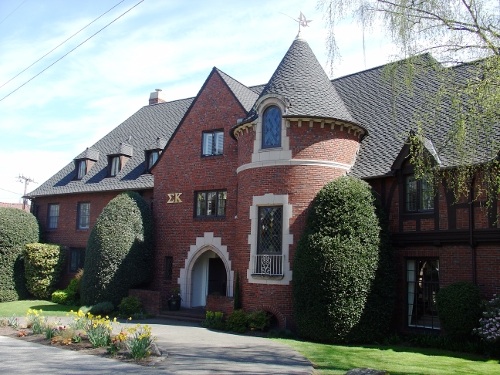 Above: The Sigma Kappa House, University of Washington, where my grandmother was a housemother in the early to late 1960’s

What if… That is the essence of every story an author writes.

For example, “What if a woman, whose home is nearly destroyed by an invading army, uses her feminine wiles to seduce a rogue of a man who she thinks can save her?” That just might have been the question Margaret Mitchell asked when she wrote Gone With The Wind.

Or, try this one, “What if a young orphan is invited to attend a school because he possesses skills and abilities he doesn’t realize he has? And then he enters a world where wonderful and frightening things happen to him?”  This would be a very broad overview of Harry Potter’s world.

Every time I start a new novel, I ask myself ‘What if…’

‘What if’ a widow were to become a housemother for a sorority in the 1960’s?’

Since this really happened to my grandmother, Alma Beatrice DeVore, it wasn’t a big stretch to imagine that scenario. But beyond the fact that this was my grandmother’s career from her late forties and into her early sixties, the similarities to the world I’ve built for the Gamma Alpha Beta’s and the Delta Rho Chi’s end there.

In ‘The Darling of Delta Rho Chi’ we meet Elise Ellingson (in tribute to my grandmother whose maiden name was Ellingson!), a 37 year old widow who finds the job of housemother daunting. Not only is Elise a widow, but she’s never been a mother and is ill-equipped to provide guidance and counsel to the young sorority women given to her care. Enter 18 year old Riley Paxton, a handful of a girl whose behavior forces her father, Jack, to confront Elise.

From there, all similarities to real life end. If it didn’t, we’d consider it a biography or, perhaps, a memoir. Instead, we land firmly in the fictional world of people who become quite real to an author.

I’ve considered visiting the sorority where my grandmother was the housemother. After all, I have some pretty vivid memories of adventures there as a young girl. In one scene of The Darling of Delta Rho Chi I have a character descend a large circular staircase. This staircase exists and was the stuff of imagination for a seven year old who practiced grand entrances down its carpeted steps. I think, however, that the memory needs to remain just that, a child’s fancy that one day became ‘What if…”