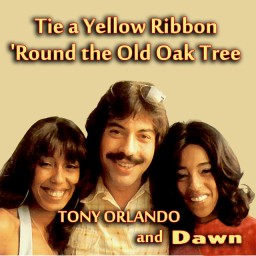 No doubt Tony Orlando and this song are intertwined for all time. ‘Yellow Ribbon’ was his and the group Dawn’s biggest hit ever, reaching number one on both the US and UK charts for four weeks in April 1973.

The song has become an ingrained part of the American culture with the symbol of the ribbons representing enduring love and devotion to those who, for whatever reasons, must be separated from their loved ones for a period of time.

Unlike popular thought, however, according to one of the song’s writers, L. Russell Brown, it was not about an ex-con coming home. From the infallible Wikipedia: 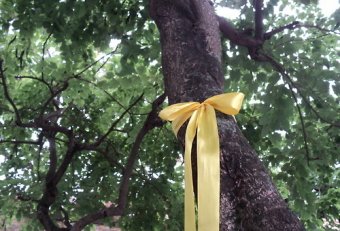 “This is NOT the story of a convict who had told his love to tie a ribbon book to a tree outside of town. I know because I wrote the song one morning in 15 minutes with the late lyrical genius Irwin Levine. The genesis of this idea came from the age old folk tale about a Union prisoner of war – who sent a letter to his girl that he was coming home from a confederate POW camp in Georgia… Anything about a criminal is pure fantasy…” 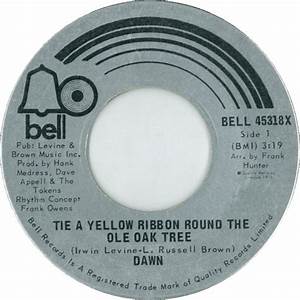 Billboard has ranked “Yellow Ribbon” as the number one song for 1973, selling 3 million records in the United States in just three weeks. In fact, BMI (Broadcast Music Inc) which tracks songs for artists claims the song as been played over 3 million times in 17 years of continuous airplay. That’s true staying power.

I have a particularly strong memory of this song as it was played at every dance I attended in the mid-1970’s. In May of 1975 I became President (called the Worthy Advisor) of my local Rainbow Girl’s Assembly. One of our traditions was to have a dance afterwards, often hiring a (bad) local band to play music. I, however, took it a different direction and got my Dad to agree to be the DJ and spin records. He was a good sport and, as a Junior High School teacher, understood kids and also knew what was popular.

At one point the very recognizable introduction to this song filled the room and all the kids swarmed to the dance floor. Everything was normal until right at the very end of the song when Tony sings “Now the whole damn bus is cheering and I can’t believe I see…” I was dancing with my boyfriend but my attention was directed to two of my guy friends – Ben and Brad – who had sung a couple songs earlier for entertainment at my installation. I turned just in time to see them each down on one knee, one arm extended towards me, and belting out the final lines of the song. For a 17 year old it was an epic moment. And one that probably belongs in a novel.

A couple of links:

I’ve now listened to this song a dozen times to find a good quality version which best shows the cool epic-ness of 1973.