“One of the greatest gifts you can give anybody is the gift of your honest self. I also believe that kids can spot a phony a mile away.” 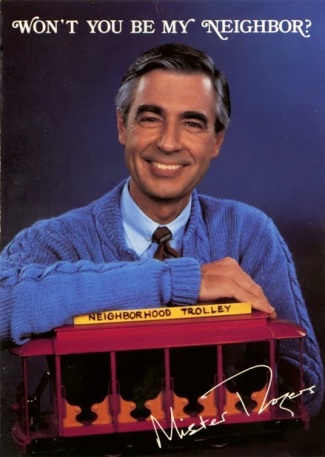 This philosophy by the late Fred Rogers guided his unlikely career as TV personality and the creator and host of Mister Roger’s Neighborhood (MRN). It premiered on October 15, 1962 as a regional show on CBC Television (out of Toronto, Canada). In 1966 he moved the program to Philadelphia. A year later, with funding from Sears Roebuck, it was nationally syndicated.

Like many such programs of the 1950’s and 60’s, MRN was low tech and low budget. It featured simple puppets which acted out plays with what looked to be handmade cardboard buildings and props. Rogers was always seen entering the front door of his house and many of his scenes – which featured such visitors as delivery man Mr. McFeely and Officer Clemons – take place in a very basic living room.

Rogers, however, ventured out into his ‘neighborhood’ to share with his young viewers interesting things about the world. From the Infallible Wikipedia:

“During each half-hour segment, Rogers speaks directly to the viewer about various issues, taking the viewer on tours of factories, demonstrating experiments, crafts, and music, and interacting with his friends. Rogers also made a point to simply behave naturally on camera rather than acting out a character (snip). The half-hour episodes were punctuated by a puppet segment chronicling occurrences in the Neighborhood of Make-Believe. Another segment of the show consisted of Rogers going to different places around the neighborhood, where he interviews people to talk about their work and other contributions that focused on the episode’s theme, such as Brockett’s Bakery, Bob Trow’s Workshop, and Negri’s Music Shop. In one episode, Rogers took the show behind-the-scenes on the set of The Incredible Hulk, which aired on CBS from 1978 to 1982.

At the start of each episode, the show’s logo appears as the camera pans slowly over a model of the neighborhood, while the ‘Neighborhood Trolley’ crosses several streets from left to right as the text reads ‘Mister Rogers Talks About…’, as the camera goes from the neighborhood to inside the Rogers’ television house. (snip) Fred Rogers is seen coming home with his jacket on, singing ‘Won’t You Be My Neighbor?’ He goes into the closet door by taking off his jacket, and hanging it up, and grabs a cardigan zipper sweater to put on. After that, he takes his dress shoes off, and grabs a pair of blue sneakers to put on. One of Rogers’ sweaters now hangs in the Smithsonian Institution, a testament to the cultural influence of his simple daily ritual.”

I was only peripherally aware of Mr. Roger’s Neighborhood since it aired on PBS when I was ten and far beyond the target audience’s age. That all changed, however, when my son was little. At age three, watching MRN became a daily ritual and, I think, greatly impacted him. It was one of the few programs on TV which had his rapt attention. Mostly, my child would turn the thing off if given a chance. But not that show.

One morning I was busy with my infant daughter and happened to walk into our family room during MRN. There my son, still in his pajamas, sat on the floor in front of the TV and he was ‘talking’ to Mr. Rogers. Of course that was how the show was designed. Fred Rogers would look directly at the screen and often ask questions of his viewers as to their feelings. My son was answering every one. To him, Mr. Rogers was a friend and as real as any other person in his life.

I greatly admire Fred Rogers and how he followed his own vision and path and I try to live by his mantra by being my ‘honest self’ as it’s one of the best gifts anyone can give to another person.

You can read much more here: