It really should not come as a surprise that a Snowpocalypse has gripped Seattle the first week of February. It could be worse, however, if one looks back in time. The year was 1916 and on February 5th of that year, the Puget Sound region was still reeling from a heavy snowfall which began late on January 31st. It was a 24 hour period from February 1st to 2nd, however, which produced a whopping 21 and half inches of the white stuff. That record snowfall still stands. 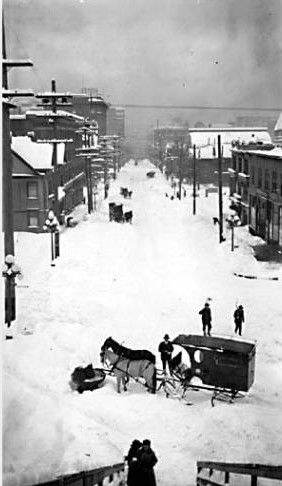 Union Street in Seattle as viewed from 9th Avenue, February 1916. Photo from University of Washington Libraries, Special Collections (link below)

The Infallible Wikipedia gives us but a brief glimpse of that event:

However, it does link to a more comprehensive article from HistoryLink.org which, I’ve found over the years, provides pretty comprehensive coverage of Seattle history minutiae. From the article:

“When the big snow of 1916 began to fall on a cold Monday on January 31, 1916, there may have been more cameras than shovels in the hands of amateurs. The flurry of snapshots of our second greatest snowstorm illustrate snow-stopped streetcars, closed schools, closed libraries, closed theaters, closed bridges, a clogged waterfront, collapsed roofs, and — most sensationally — the great dome of St. James Cathedral, which landed in a heap in the nave and choir of the sanctuary. (There were no injuries to persons.)

The unusually cold January already had 23 inches of snow on the ground when, on the last day of the month, it began to fall relentlessly. Between 5 p.m. on Tuesday, February 1 and 5 p.m. on Wednesday, February 2, 21.5 inches accumulated in the Central Business District at the Weather Bureau in the Hoge Building. This remains (in 2002) a record — our largest 24-hour pile. 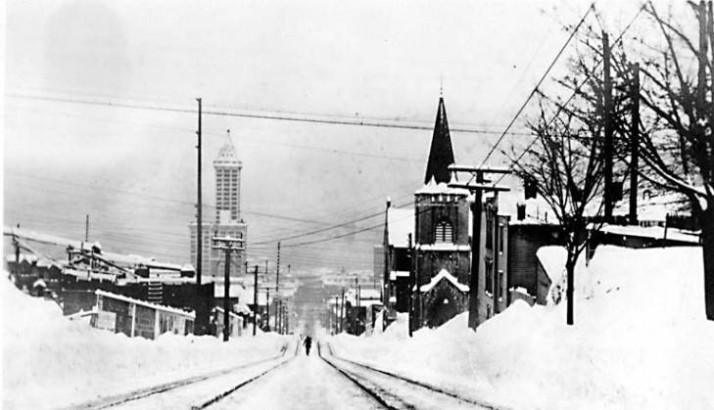 James street as viewed down 9th Avenue. Smith Tower – then the tallest building in Seattle – is on the left. February 1916. Photo from the University of Washington Libraries, Special Collections (link below)

The 1916 snow was a wet snow, and it came to a foul end — a mayhem of mud that mutilated bridges and carried away homes.”

In the category of how quickly we forget, it was just two years ago that the record for snowfall on any February 5th was set when two inches was recorded at Sea-Tac airport. An additional 5.1 inches fell on February 6th for a total of 7.1 inches on these two dates in 2017. 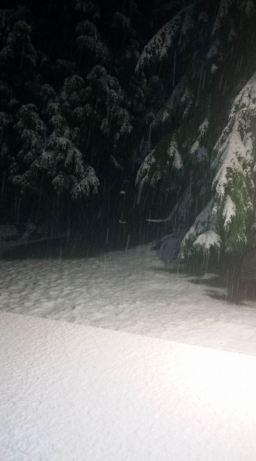 The snowfall in progress on
5 February 2017 near Kirkland, WA ·  From my Facebook post:
“About an inch and a half so far. Of course this is nothing compared to what Michelle has gotten in Tahoe Vista this year.”

Since the hubby and I moved north from the greater Seattle area a little less than a year ago, I cannot accurately compare the amount of snow from our old house to the one here in Mount Vernon. As of this morning (I write my blog the day before, so it’s February 4) we have between 3 and 4 inches and it is still snowing. The view from my office window – with a little wind in play – gives the appearance of being in a powdery snow globe.

I cannot complain about Puget Sound snow, however. This region has some of the mildest weather in the world and I think of the white stuff as a wondrous treat to be enjoyed. Ensconced in my warm house with a morning cup of coffee – or later in the day with a mug of hot buttered rum – the beautiful coat of white is a magical event.

Too soon the temperatures will rise, the snow will melt, and we will be back to the brown and green scenery which characterizes a Puget Sound winter. One thing I do know is that within a few short weeks, the plum and cherry tree blossoms will erupt in shades of violet and pink and carpets of purple, yellow and white crocus will spread across the landscape. All we will recall from the winter of 2019 will be these few short days in early February when the landscape was transformed into a winter wonderland.

Interesting perspective on the February 5/6 2017 event:

An article which highlights the biggest Puget Sound snowstorms:

Some great historic photos of the February 1916 snowstorm:

Article about the February 5th and 6th, 2017 snowstorm: