January 29th – smack in the middle of winter – is the perfect time to stay indoors and celebrate National Puzzle Day by assembling a centuries old favorite: the jigsaw puzzle. 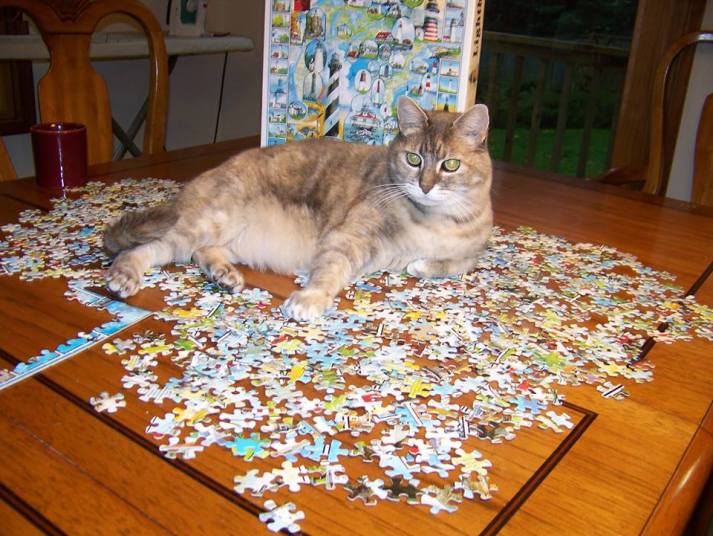 A helper joins the puzzle fun.

The first commercial jigsaw puzzles were introduced in the 1700’s in England. They were named as such based on the process used to create them. From the Infallible Wikipedia:

” The engraver and cartographer John Spilsbury, of London, is believed to have produced the first jigsaw puzzle around 1760, using a marquetry saw. Early jigsaws, known as dissections, were produced by mounting maps on sheets of hardwood and cutting along national boundaries, creating a puzzle useful for the teaching of geography. Such ‘dissected maps’ were used to teach the children of King George III and Queen Charlotte by royal governess Lady Charlotte Finch.”

Since their inception, jigsaw puzzles have evolved and changed. The original puzzles – made exclusively from wood – were costly and out of reach for the ordinary person. That began to change, however, in the late 1800’s when cardboard puzzles were introduced.

The popularity of the cardboard jigsaw puzzle exploded during the Great Depression as they were relatively inexpensive and could be put together, taken apart, and reassembled innumerable times, thus providing hours of entertainment.

The manufacturing method has evolved over the years. Most modern puzzles are cut from paperboard. The process to cut a thousand piece puzzle, for example, requires large presses which exert as much as 700 tons of pressure and precision cutting.

Jigsaw puzzles also come in a variety of sizes. A child’s first puzzle is likely to be from four to nine pieces. For something a bit more challenging, an adult can assemble a 300 piece puzzle in an hour or two. A thousand piece puzzle may take numerous sessions over several days.

If you have all winter and unlimited space, then you might want to pick up the 52,110 piece puzzle produced by MartinPuzzle in November 2018. It features a collage of animals and is 274 by 80 inches in size! Or, just short of 23 feet by 7 feet. I don’t know about anyone else, but my dining room table is not that big.

The animal collage puzzle with 52,110 pieces

The 50 pound behemoth is currently on sale for a mere $346… down from its list price of $576. And, if you’re worried about finding the right pieces, it comes in four boxes each containing 28 separate sections of 465 pieces. 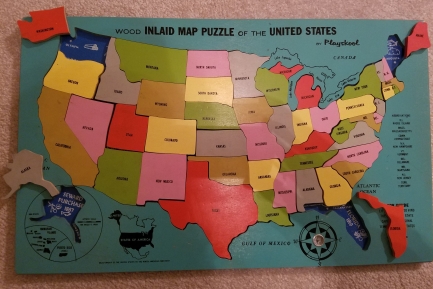 The first puzzle I fell in love with was a 1960’s wooden map of the United States. As a young child I would dump out the pieces and then put all 50 of them back in. While Hawaii was gypped and had no pieces, Michigan was the coolest state as it had two pieces! That puzzle was my primer for memorizing all 50 states and their capital cities.

No doubt my mother noted my interest in puzzles and soon they appeared as birthday and Christmas gifts. I still have  several of the ones I was given.

After my son arrived I introduced him to puzzles while he was still a baby. He, like his mother, was fascinated. By the time he was one and half he was able to put together a 24 piece puzzle! At the time I did not realize that this was unusual baby behavior. But we went with it. Over the years, this activity is one he and I continue to enjoy doing together. At times we engage in ‘competitive’ puzzling where we will race to see who can put in the most pieces. To gain the other’s attention when placing a piece, we might tap our fingers on the puzzle in dramatic fashion. It’s all in good fun and mostly we have developed a cooperative puzzling style. He will work on the main body and I’ll usually put together as much of a section as I can off to the side then, once I’m bored with it, I’ll drag it to its approximate spot and turn it over to him. Then it’s off to a new section for me. 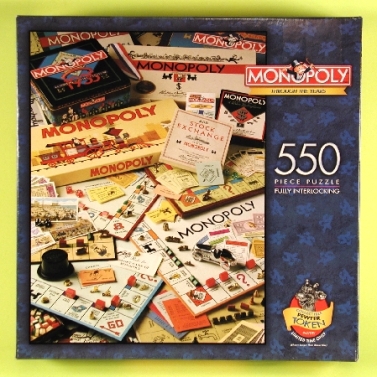 My favorites are ones with a central theme and multiple smaller pictures: National Parks, American Presidents, and Board Games are a few which we’ve assembled that come to mind.

My least favorite ones are those which have little visual interest such as those touted as ‘the world’s most difficult’ puzzle and tend to be quite monochromatic.

I’ve tried to curtail my puzzle ‘habit’ in recent years. But often, when I am near a Goodwill or Value Village store, the temptation is just too great and in I go in search of a new to me puzzle to keep me company on a cold winter’s day. It’s the best.

A couple of links about National Puzzle Day and Jigsaw puzzles specifically:

Or for something a bit smaller: https://www.amazon.com/s/?ie=UTF8&keywords=largest+jigsaw+puzzle&tag=geminipcstand-20&index=aps&hvadid=33784252994&hvqmt=p&hvbmt=p&hvdev=c&ref=pd_sl_6sy53x6u1y_p