With the extreme temperatures which have gripped much of the United States the past week, people – especially parents with kids at home – often seek out water as a way to find relief.

It’s appropriate, then, that the first swimming school in the U.S. opened on July 23, 1827, in Boston, Massachusetts. The proprietor, German immigrant Franz Lieber, believed that swimming was a healthy activity necessary to aid a boy’s growth.  Unfortunately, the swimming school failed after two years 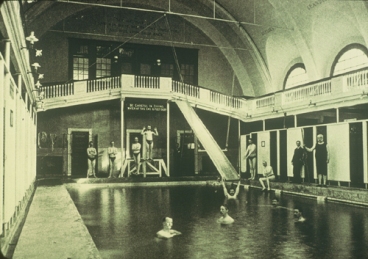 Now I can’t find the reason for this failure except to say that it might have been due to the absence of a heated water holding area where his young charges could safely swim. If those boys were forced to swim in the Charles River, they likely found it somewhat unpleasant. Alas, it was another 60 years before the first public swimming pool opened in nearby Brookline.

Over the years, the swimming pool has become a staple of American life; a desired amenity for traveling Americans and nearly a requirement for suburban homes across the southern half of the nation.

In my research I found some interesting ‘records’ for pools. From the Infallible Wikipedia:

The Fleishhacker Pool in San Francisco was the largest heated outdoor swimming pool in the United States. Opened on 23 April 1925, it measured 1,000 by 150 ft (300 by 50 m) and was so large that the lifeguards required kayaks for patrol. It was closed in 1971 due to low patronage.

One of the largest swimming pools ever built was reputedly created in Moscow after the Palace of Soviets remained uncompleted. The foundations of the palace were converted into the Moskva Pool open-air swimming pool after the process of de-Stalinisation. However, after the fall of communism, Christ the Saviour Cathedral was re-built on the site between 1995 and 2000; the cathedral had originally been located there.

One of the world’s most iconic and beautiful pools located at Hearst Castle in California.

If you want to really indulge in pool envy one needs only to watch the HGTV show “Ultimate Pools” which features beautiful private oases of the rich but not famous.

Having grown up in Yakima, Washington, the hot, dry summers made it a natural spot for pools to proliferate. When my family moved there in the early 1960’s, however, very few families I knew had built in backyard pools. Instead, the first ‘pool’ I recall was about the size of large area rug and constructed of industrial canvas and metal poles. It was no more than 18 inches tall. Once it was filled with icy cold water my sister and I would, on hot days, lay in the shallow water to cool off.

For my 7th birthday a new pool arrived. It was round and about the size of a small bedroom. Its hard plastic walls stood about 3 feet tall and it was definitely an upgrade.  It was during this time, however, that I was introduced to the public swimming pool. The best summer days were those when we got to go down to Franklin Park – about a mile from our house – and pay our 10 cents to swim.

I was unable to find an historic photo of the death board at Franklin Park. It was located on the other side of the water slide in the original pool. The pool in the foreground was added sometime after 1980.

It seemed as if we were gone all day but I’m pretty certain it was only for a couple of hours. The pool was constructed in an ‘L’ shape with one area being the shallow end and the other being the terrifying end. In the years I went to Franklin pool there was one thing I never did. I never jumped off the high dive board. I can still see that board, suspended over the deep end, beckoning me like the death trap I was certain it must be. Yet other, much braver, young souls would scale the ladder, walk the plank, and then plunge 47 feet to their death.  Okay, so maybe it wasn’t 47 feet. More like fifteen. And to the best of my knowledge no one ever died. But I was not taking any chances. Mostly I got cold after a short time swimming and would go hang out in the locker room with the girl who worked there. I remember her name was Nancy and she was in high school and very kind to this annoying child.

It was in the summer of 1973, however, that things really changed. That was the year my parents decided to put a pool in the backyard of our home. What an exciting summer that was. One morning a crew arrived with backhoes and soon there was a huge hole behind our house. For several weeks we watched the daily progress until one day in late summer the pool was complete and the hoses began to flow.

That pool was the dream of every teenage girl. A diving board was set just above the water so no death defying plunges were required; and it featured a curved water slide that flung the rider into the pool.

My brother demonstrating proper use of the water slide. September 1973

As for me, I still got cold far too easily and discovered that the best way to ‘swim’ was with the aid of an air mattress. Hours were spent each of the next several summers floating on my conveyance about the pool, getting in the water when I got too hot, but would soon return to the lazy comfort of my air mattress.

16 year old me out investigating the pool construction site August 1973. They had to remove a deck at the side of the house to access the yard. (behind me)

Eventually the upkeep of the pool became too much and was one of the factors which prompted our parents to sell the house and move in 1984. What great memories I have of those summers in the 1970’s and the hours spent afloat on that pool. When we are young we often don’t appreciate something so special. Ah, to be 16 again with nary a care in the world and a pool to call my own!

As always a couple of links: