The Tribe Has Spoken…

The Logo is updated for each season but always include the tagline: Outwit, Outplay, Outlast. This is for the season which begins on September 26, 2018.

In the year 2000, this program captured the imaginations of millions of American’s and was catapulted to the top of the TV ratings. Now, 18 years later, it remains a perennial favorite for some 10 million viewers. The show: Survivor.

In the course of its 36 ‘seasons’ the program has featured 536 contestants who vie for the one million dollar prize and the coveted title of ‘sole survivor.’ The premise of the show is summed up by the Infallible Wikipedia:

“Sixteen or more players, split between two or more ‘tribes’, are taken to a remote isolated location (usually in a tropical climate) and are forced to live off the land with meager supplies for 39 days (42 in The Australian Outback). Frequent physical and mental challenges are used to pit the teams against each other for rewards, such as food or luxuries, or for ‘immunity’, forcing the other tribe to attend ‘Tribal Council’, where they must vote off one of their tribemates.

Jeff Probst, host and producer of Survivor. “The Tribe Has Spoken.”

Signaling the halfway point in the game, survivors from both tribes come together to live as one, making it to the ‘merge’. At this point, survivor will compete against each other to win Individual Immunity; winning immunity prevents that player from being voted out at Tribal Council. Most players that are voted out after the merge – form the game’s ‘jury’. Once the group gets down to three people, a final Tribal Council is held where the remaining players plead their case to the jury members. The jury then votes for which player should be considered the ‘Sole Survivor’ and win the show’s grand prize. In all seasons for the United States version, this has included a $1 million prize in addition to the Sole Survivor title; some seasons (particularly earlier seasons) have included additional prizes, such as a car.

The U.S. version has introduced numerous modifications, or ‘twists’, on the core rules in order to keep the players on their toes and to prevent players from relying on strategies that succeeded in prior seasons. These changes have included tribal switches, seasons starting with more than two tribes, the ability to exile a player from a tribe for a short time, hidden immunity idols that players can use to save themselves or others at Tribal Council, special voting powers which can be used to influence the result at Tribal Council, chance to return to regular gameplay after elimination through the ‘Redemption Island’ or ‘The Outcast Tribe’ twists, and a final four fire-making challenge as of season 35.”

This description does not, in my opinion, capture what is so fascinating about Survivor. To me, it is seeing how individual people respond to a difficult environment, difficult people, and difficult physical challenges. It is a great study of human behavior and relationships. It’s impossible to predict just who will successfully navigate each season to emerge the victor. 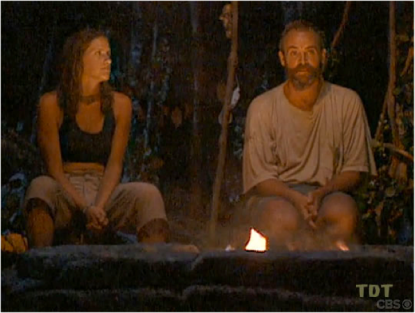 When the show first started, the producers imagined that a physically strong man would be the most likely winner. The world was shocked, however, when an overweight, 40 something, gay guy, took the title. Viewers were appalled because Richard Hatch had been manipulative, performed poorly in challenges, and offended his fellow contestants. What they all missed was how persuasive he was and his early vision that to win, one needed to build a coalition – which he called an alliance – and carried him to the end.

In the 35 subsequent seasons his methods have worked – sometimes – but not always. Ultimately, a combination of a person’s social skills and their ability to convince a jury that they deserve the title has proved to be more important than prowess at challenges.

It’s this element of the game which I find most intriguing and, despite not always liking the results, I will tune in this Wednesday, September 26, to watch Season 37.

Back in 2000 and 2001 I considered applying to be on the show. But, with elementary aged children at home, it wasn’t an option. In the subsequent years I determined I would not do well being forced to live in deprivation or sleep on a bamboo platform. Although I’m pretty certain I’d be voted out early due to the fact that I’d suck at the physical challenges and my tribe would (accurately) see me as a detriment to winning.

So instead I have enjoyed each season, but especially the ‘Millennials versus GenX’ and ‘Heroes vs. Healers vs. Hustlers.’ Why? 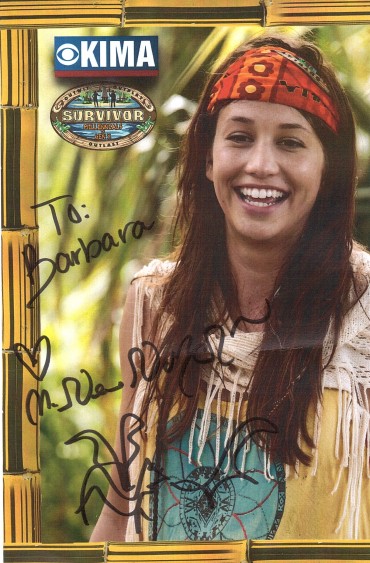 The autographed photo I received from Michelle Schubert in September 2016.

When they announced the participants for the Millennials season a young woman, Michelle Schubert, from my hometown of Yakima, Washington, was on the show. I got to attend the September 2016 premiere at the Capitol Theatre in Yakima, meet her and have all my ‘behind the scenes’ questions answered during Q &A sessions before, during and after each segment of the premiere. It was a bucket list sort of evening for me! Although Michelle didn’t make it to the finals or win, it was fun to root for the hometown favorite who was one of the members of the ‘jury’ that decided the winner.

The next fall I found myself rooting for contestant Ryan Ulrich as I share the same last (married) name. Cousin Ryan, as I called him, DID make the finals but ended up in third place. 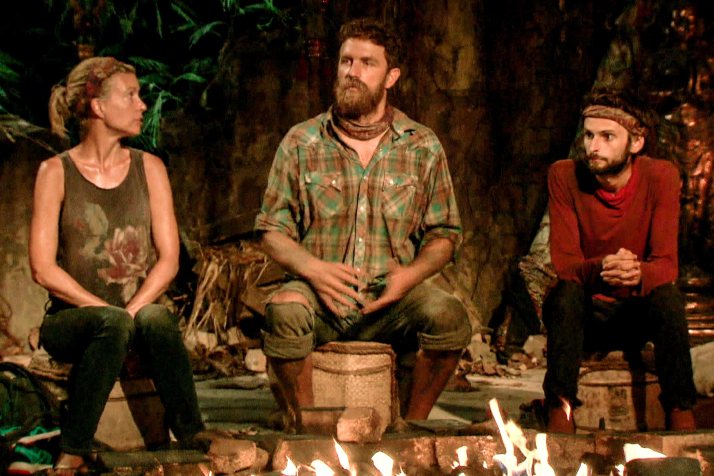 If you ever want to have a conversation about Survivor, I consider myself a super-fan, and can discuss any season! If you ask I’ll tell you my favorite winner and the winner I most disliked. I can discuss bad strategy decisions and my theory on how they give a winner’s edit to the person who ultimately prevails. So bring it on. The tribe has spoken.

As always, a couple of links: