Perhaps the most powerful medium a person experiences is music. After all, I imagine each of us has at least one song we associate with a specific time, event and person. And then there are songs which, although they may not inspire a specific memory, become so much an ingrained part of our culture, they transcend place and time. 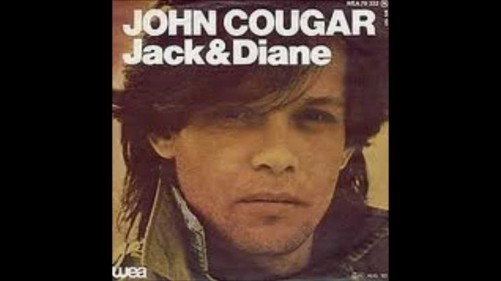 One such song spent four weeks at number one in October 1982 and, in 2012, made the Recording Industry of America’s list of top songs of the century.

And it continues on to tell the story of two American teenagers trying to figure out life. I think the song resonates because the experience is universal. It matters not if you were a teenager in 1962, 1982 or in 2012, a part of you yearns to break free of that place where you grew up; and a part of you longs to be loved and find that one other person who you can share your life and your love.

Jack and Diane – by John “Cougar” Mellencamp – effectively captures the ambivalence of first love. From the song:

Long after the thrill of livin’ is gone

Long after the thrill of livin’ is gone

And save my soul

Hold on to sixteen as long as you can

Make us women and men

The song was almost never recorded. According to Mellencamp, he struggled with how to perform the song to achieve the sound he desired. From the Infallible Wikipedia:

“ Jack & Diane was based on the 1962 Tennessee Williams film Sweet Bird of Youth. He said of recording the song: ‘Jack & Diane was a terrible record to make. When I play it on guitar by myself, it sounds great; but I could never get the band to play along with me. That’s why the arrangement’s so weird. Stopping and starting, it’s not very musical.’ Mellencamp has also stated that the clapping wasn’t supposed to be included in the finished song. It was recorded with the clapping in order to help keep tempo and then it was to be removed. However, he realized the song did not work without it.”

For me, the song does not inspire specific memories but, instead, evokes the emotion of loss. At 16, 17 and 18 years old, there’s nothing quite like that first love. It’s a heady time in life when one’s first real love takes control and you think it will always be like that. And yet there’s a melancholy to a warm summer’s night, or a blustery fall day, spent with that person when you try to cling to that moment, only to have it slip away. It’s this quality which makes the song so enduring.

I know you would all be disappointed if there’s not a Wikipedia link, so here it is:

The video is worth four minutes of your time: