Invasion of the Terranauts 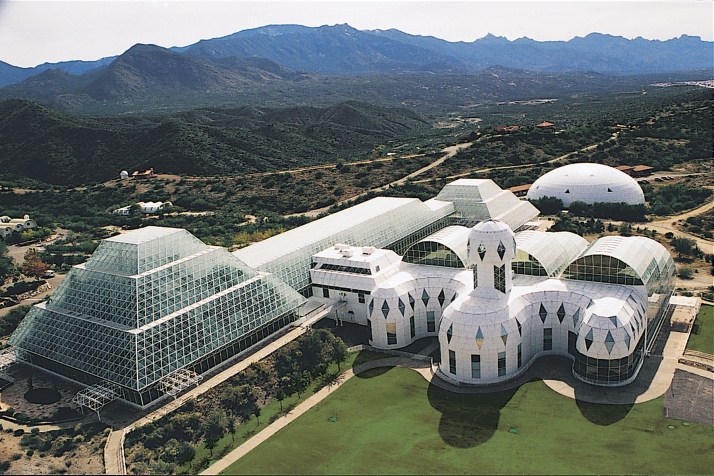 It was the stuff of science fiction when, on September 26, 1991, four women and four men entered the project known as Biosphere 2.

Located in the Arizona desert forty-one miles northeast of Tucson, the facility was developed in hopes of learning how colonization on other planets might work. The idea was that these eight scientists would live within the biosphere complex for two years and would grow their own food and manage all aspects of their world without help or interference from outside sources.

Inside Biosphere 2 were five distinct ecosystems. From the infallible Wikipedia:

“Its five biome areas were a 1,900 square meter rainforest, an 850 square meter ocean with a coral reef, a 450 square meter mangrove wetlands, a 1,300 square meter savannah grassland, a 1,400 square meter fog desert, a 2,500 square meter agricultural system, a human habitat, and a below-ground infrastructure. Heating and cooling water circulated through independent piping systems and passive solar input through the glass space frame panels covering most of the facility, and electrical power was supplied into Biosphere 2 from an onsite natural gas energy center.”

As one can imagine, the project was beset with problems including not enough oxygen, dietary issues and – when one of the biospherians became ill and was removed from the project for a time – if outside intervention was justified.  When the first experiment ended on September 26, 1993, plans were already underway for another set of scientists to participate in a second project:

“Biosphere 2 was only used twice for its original intended purposes as a closed-system experiment: once from 1991 to 1993, and the second time from March to September 1994. Both attempts, though heavily publicized, ran into problems including low amounts of food and oxygen, die-offs of many animals and plants included in the experiment, squabbling among the resident scientists, and management issues.”

Personally, I find it difficult to envision what it would be like to exist for two years in only five square miles and with the same 7 people as your daily companions. From a writer’s perspective, however, I think this is a fascinating premise for a science fiction book (with romantic elements perhaps?). Had someone researched and written such a book? I wondered. Indeed they have. The Terranauts, by TC Boyle, was published in October 2016 (hardback) with the paperback version set to be released on October 3 this year.  Although I have not yet read the book I have requested it from the King County Library. It will be a perfect diversion for some upcoming blustery day when I can enjoy the wonderful changing seasons from inside my climate controlled dwelling on this planet which is Biosphere 1.

Here’s the links to Wikipedia and Amazon where you can read more about Biosphere 2 and read reviews on the novel: