Animal Crackers… on the porch

“Listen my children and you shall hear

Of the midnight ride of Paul Revere,

On the eighteenth of April, in Seventy-five;

Hardly a man is now alive

Who remembers that famous day and year.”

But that’s not the important topic this week. Nor is our topic the catastrophic earthquake which all but destroyed San Francisco on April 18, 1906.

The crackers were first imported to the United States from England in the late 19th Century. They proved so popular that Stauffer’s Biscuit Company began production in York, Pennsylvania in 1871. It was in 1902 when they became known as ‘Barnum’s Animals’ and were packaged in the circus themed boxes which are so recognizable. Just prior to Christmas that year a string was added to the box so the cookies could be hung on a tree. Now, over 100 years later, the boxes still retain the string but I doubt many know why there is a string!

Some other interesting facts from the Infallible Wikipedia: 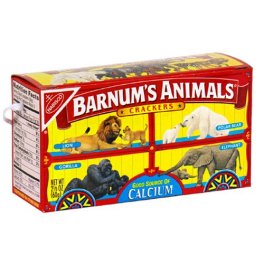 “Barnum’s Animals Crackers are all produced in the Fair Lawn, New Jersey, bakery by Nabisco Brands. More than 40 million packages of Barnum’s Animals Crackers are sold each year, both in the United States and exported to 17 countries worldwide. The cookies are baked in a 300-foot (91 m)-long traveling band oven. They are in the oven for about four minutes and are baked at the rate of 12,000 per minute. About 15,000 cartons and 330,000 cookies are produced in a single shift, using some 30 miles of string on the packages. This runs to nearly 8,000 miles (13,000 km) of string a year. Those bright circus boxes are produced in three colors – red, blue, and yellow – with different variety of animals on each.”

I know all of you would be disappointed if I didn’t share some personal anecdote which relates to our topic. So with apologies to Longfellow, here it goes:

Listen my readers and you shall hear

of the midnight antics from Senior year…

It cost but a quarter for of box of treats,

Yes Animal Crackers for boys that were neat.

Up to the front porch of our desire’s house

My friend Snide and I always sly as a mouse.

A poem attached to each as a clue

Just “who,” it asked, “left these cookies for you?”

The unlucky ones found bushes and trees

Draped with rolls and rolls of contraband TP

Since, heaven forbid, we didn’t want to get caught.

For those who want to know more about these tasty treats I direct you to: https://en.wikipedia.org/wiki/Animal_cracker

For those who want to know more about those midnight capers from teenage years, send me a message or post a response below and I will reply and give you, as Paul Harvey used to say, ‘the rest of the story!