Cheryl ‘Rhode Island’: “That’s a tough one. I’d have to say April 25th. Because it’s not too hot, not too cold, all you need is a light jacket.” 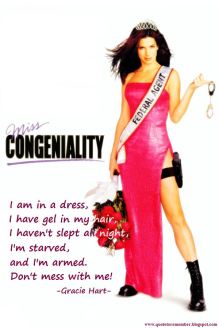 If you’ve never seen the movie Miss Congeniality, I encourage you to request it from your local library, rent it on Netflix or your preferred movie provider. I have always found the movie to be funny, poignant and effectively showcase the human spirit. The casting was superb with Candice Bergen who tries to hold on to her glory days as a former beauty queen turned pageant director; William Shatner is priceless as Stan Fields, the smarmy host of the show; Heather Burns as the naïve Miss Rhode Island; and, of course, Sandra Bullock, as Gracie Hart, FBI agent turned pageant contestant to get to the bottom of an evil plot to take down the fictional Miss United State’s pageant.

The Infallible Wikipedia provides a more in depth summary. I include the first two paragraphs since, if you have not seen the movie, I would not want to ruin the ending:

“In 1982, a very young Gracie Hart steps into a playground fight to beat up a bully who is threatening a boy she likes. However, the boy feels humiliated at being rescued ‘by a girl’, and rejects her rudely, whereupon she punches him in the nose and leaves to sulk alone. Years later, Gracie is now a tough Special Agent for the FBI. During a sting operation against Russian mobsters, she disobeys her superior’s orders in order to save a mob boss who appears to be choking, which causes one of the other agents to be shot. She is demoted to a desk job as punishment.

Soon after, the agency is alerted, via a letter from the notorious domestic terrorist known only as ‘The Citizen’, to a bomb threat at the upcoming 75th annual Miss United States beauty pageant in San Antonio, Texas. Gracie’s partner Eric Matthews is put in charge, and he relies on Gracie’s suggestions, but he takes credit for them himself. One of Gracie’s ideas is to plant an agent undercover at the event. When all possible candidates are deemed unfit, Eric then suggests that Gracie take on that role, replacing Miss New Jersey, who was to be disqualified. Beauty pageant coach Victor Melling teaches Gracie how to dress, walk, and behave like a contestant. Though initially appalled, she comes to appreciate Victor’s thoroughness. Gracie enters the pageant as ‘Gracie Lou Freebush’, representing New Jersey, and becomes friends with Cheryl Frasier, who is Miss Rhode Island. As the competition begins, Gracie impresses the judges during the talent competition with her glass harp skills and self-defense techniques.”

There are so, so many memorable lines from the movie. The one above is excellent but I think my favorite is this clip:

And, of course, the clip for the April 25th quote:

What I most like about the movie is watching Gracie’s transformation as a character. While the movie pokes some gentle fun at the beauty pageant industry what shines through, ultimately, is Gracie learning to respect and like these people – so different from herself – which, I believe, is the foundation of all good relationships.

One thought on “Miss Congeniality”