A Sleepless May Day to Remember

When this building opened on May 1, 1931 it was, at 1250 feet, the tallest in the world. More than that, however, it has become an iconic symbol of New York City and America.

It only took two years for the Empire State Building (ESB) to become an American movie favorite location when a rather large ape named King Kong was seen climbing the structure –Fay Wray grasped in his hairy paw – during the final scenes of the film which bore his name.

I will say that whoever wrote the article on the building for the Infallible Wikipedia had way too much time on their hands. In it there is an exhaustive history of the land beneath the building, what was there before, how they disposed of the materials from the structure they tore down, how tall the antenna on top of the ESB is, and a hundred other trivial facts.

For those who enjoy learning that much minutiae, knock yourself out. My eyes glazed over and I seriously considered consuming more coffee than I should just to get through it.

My interest is primarily on the cultural impact of the structure. From the Infallible Wikipedia:

“The Empire State Building is an American cultural icon and has been featured in more than 250 TV shows and movies since the film King Kong was released in 1933. A symbol of New York City, the tower has been named as one of the Seven Wonders of the Modern World by the American Society of Civil Engineers. The Empire State Building and its ground-floor interior have been designated as a city landmark by the New York City Landmarks Preservation Commission, and were confirmed as such by the New York City Board of Estimate. It was also designated a National Historic Landmark in 1986, and was ranked number one on the American Institute of Architects‘ List of America’s Favorite Architecture in 2007.”

A favorite, more recent, movie in which the ESB figures prominently is Sleepless In Seattle. The ESB becomes a main feature of the plot when Annie (Meg Ryan) watches the 1957 movie An Affair To Remember and is inspired to write a letter to the widower Sam (Tom Hanks) asking him to meet her on the observation deck of the ESB on Valentine’s Day just like in the Carey Grant and Deborah Kerr movie. 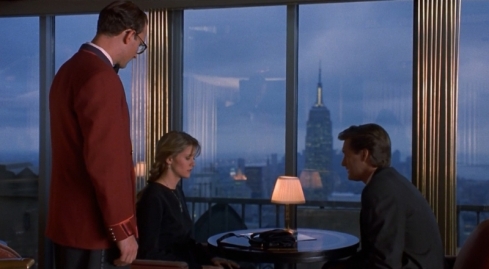 Through a series of plot twists and turns Annie decides to not go meet him but instead ends up in a Manhattan restaurant with her fiancé on February 14. As fate would have it they are seated near a window with a view of the ESB and Annie looks at the building and knows she must break off her engagement and take a chance with someone she’s seen but never met.

The movie is recognized by the American Film Industry as one of the top 10 in the category of romantic comedy movies. Although the plot is pretty obvious, Tom Hanks and Meg Ryan are just so adorable that they carry it off in a way that leaves women everywhere searching for a tissue.

Although I never saw the movie in the theater (it was released in June 1993 and I was kinda busy with a toddler and newborn) someone gave me the movie on VHS. Nowadays, it’s a perennial favorite on cable and if I happen to come across it, I’ll watch it. I am, after all, a sucker for a good romance.

Here are the links for the exhaustive history of the ESB and also for the three movies:

One thought on “Sleepless In Seattle”