Z Is For Zero

This title was to be the final alphabet mystery series novel by Sue Grafton.

Sadly, she died December 28, 2017 and, according to her daughter, the final book will never be completed and the series ends with Y is for Yesterday.

April 24, 1940, however, should be B is for Birthday, the day Grafton was born in Louisville, Kentucky.

Although I’m not a big mystery reader, I do admire writer’s who display the tenacity it takes to achieve success. Grafton was such a writer.

Her early life was marred by a difficult home life as both her parents’ were alcoholics and, according to Grafton, “From the age of five onward, I was left to raise myself.”

It was her father’s influence which sparked an interest in writing. According to the Infallible Wikipedia:

“Grafton’s father was enamored of detective fiction and wrote at night. He taught Grafton lessons on the writing and editing process and groomed her to be a writer. Inspired by her father, Grafton began writing when she was 18 and finished her first novel four years later. She continued writing and completed six more novels. Only two of these seven novels (Keziah Dane and The Lolly-Madonna War) were published. Grafton would later destroy the manuscripts for her five early, unpublished novels.”

Success eluded her so she began writing screenplays and worked steadily for 15 years as such. The skills she acquired in this occupation were essential as she learned about story structure, realistic dialogue and how to create effective action sequences.

The Alphabet Mystery series begins in 1982 with A is for Alibi. Also from Wikipedia:

“Grafton had been fascinated by mysteries series whose titles were related, such as John D. MacDonald’s Travis McGee series, each of which included a color in the title, and Harry Kemelman’s Rabbi Small series, each of which included a day of the week in the title. While reading Edward Gorey’s The Gashlycrumb Tinies, a picture book with an alphabetized list of ways for children to die, Grafton decided to write a series of novels whose title would follow the alphabet. She immediately sat down and made a list of all of the crime-related word that she knew.”

It was after the publication of G is for Gumshoe that Grafton was able to quit writing screenplays and focus on her novels.  There is one book in the series which does not comply with the naming conventions and that’s the letter ‘X’ – which is the complete title of the 24th book.

It was at a writer’s conference a few years back that I was told by an agent that having a series is the way to go. Of course, series or not, one must still obtain a publisher, have a marketing plan and do all the leg work to promote one’s books. For most writers, in my opinion, that’s the harder task than penning the book. 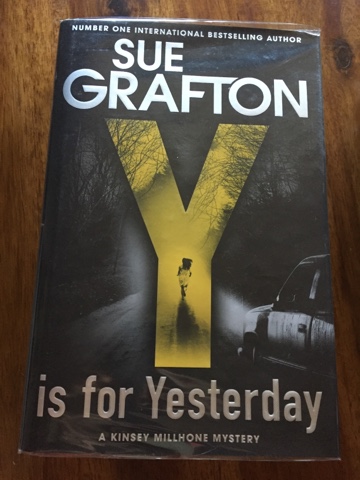 Writer’s write and, despite the lack of a publisher, it’s what we are compelled to do. Sue Grafton was also compelled to write so a toast to her memory on her birthday and the gift Dishe left behind with those 25 alphabet books.

To read more about Sue Grafton, here’s a link: https://en.wikipedia.org/wiki/Sue_Grafton