From Practical to Ridiculous

It was patented on April 10, 1849, as a way for the inventor to pay off a $15 debt. Today, this device is a ubiquitous part of everyday life. What is it? The safety pin.

Although we take its clever design for granted, the safety pin is truly ingenious and, for those of us who used cloth diapers on our children or who ever has had a torn hem or  a loose fitting garment, it’s been the one thing that’s saved us.

“American mechanic Walter Hunt is regarded as the inventor of the safety pin that bears resemblance to those used today. The safety pin included a clasp that covered the point and kept it from opening, and a circular twist at the bend to act as a spring and hold it in place. Charles Rowley (Birmingham, England) independently patented a similar safety pin in October 1849, although the company no longer makes these.

Hunt invented the device in order to pay off a $15 debt to a friend. He used a piece of brass wire that was about 8 inches long and made a coil in the center of the wire so it would open up when released. The clasp at one end was devised in order to shield the sharp edge from the user. 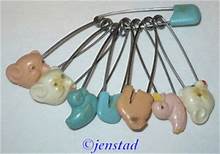 The safety pin was an especially great invention for mothers everywhere to keep the baby’s diaper pinned without stabbing the child. Making a large pin with a cute animal as the protective head has been a popular adaptation for decades.

It never occurred to me, however, that a safety pin would be used for anything other than, well, holding together fabric in some fashion.  Boy was I wrong. Today safety pins are routinely used as jewelry and to, ahem, enhance one’s body art. 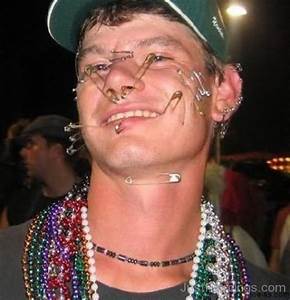 When Punk Rock became a thing in the late 70’s and early 80’s the practice of using a safety pin as a decorative piercing became popular with the musicians and their followers.

Tattoos and piercings – any numbers of which are safety pins – are a common fashion in the 21st century. Additionally, safety pins have been incorporated into impressive jewelry designs.

Along with a G-2 pen and paperclips, safety pins are – in my opinion – an indispensable item one should carry with them at all times! So hooray for Walter Hunt and the invention of this invaluable item.

And, of course, a link to Wikipedia to whet your appetite for knowledge: https://en.wikipedia.org/wiki/Safety_pin