What The Heck Is Beltane?

My exhaustive search for an interesting tidbit for May 2nd turned up very little. It would seem that everyone was tired after all of the May Day activities on May 1st. 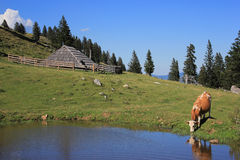 , like some of its calendar counterparts in the fall and winter, is a significant date. Prior to it becoming International Workers Day to honor labor, it was also the date of the ancient celebration of Beltane. This event was one where the women were excited because they could FINALLY get the cows out of the house and drive the beasts to the field. Kind of the equivalent of the mom who tells her kids “Go outside and play!” They followed up this bovine removal by making a huge bonfire and, I would surmise, to burn all the straw that – after many months of being the peasants version of rugs – undoubtedly assaulted the poor woman’s olfactory senses and encouraged the proliferation of vermin.

A huge outdoor feast was held around the bonfire. We refer to this as ‘camping.’ No doubt the men stood around the fire drinking mead all night and the celebration became rowdier and rowdier. This would, of course, lead to men doing stupid things… like jumping through the fire. From the Infallible Wikipedia:

“According to 18th century writers, in parts of Scotland there was another ritual involving the oatmeal cake. The cake would be cut and one of the slices marked with charcoal. The slices would then be put in a bonnet and everyone would take one out while blindfolded. According to one writer, whomever got the marked piece would have to leap through the fire three times. According to another, those present would pretend to throw him into the fire and, for some time afterwards, they would speak of him as if he were dead. This ‘may embody a memory of actual human sacrifice’, or it may have always been symbolic.”

But back to the long-suffering wives. I can only imagine that May 2nd was THEIR day of celebration. The cows were now out of the hovel, it was as clean as it would ever be and, with their men passed out from too much drink, it was a time to kick back and enjoy one day without backbreaking labor.

As always, the infallible Wikipedia provides an exhaustive recount of Beltane: https://en.wikipedia.org/wiki/Beltane