As American as apple pie and motherhood… is the celebration each year of mother’s everywhere. It was on May 9, 1914, that President Woodrow Wilson
signed a proclamation which designated the second Sunday in May as the day
to show ‘love and reverence for the Mother’s of our country” who had lost
sons in war. The proclamation decreed that the American Flag be displayed on
government bu 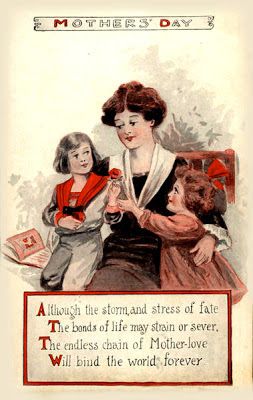 Of course the intent of the original holiday has long since been hijacked by commercialization. I doubt Anna Jarvis – the woman who pushed for the
proclamation –envisioned today’s celebration.

The modern American efforts can be traced to May 9, 1905, the day Jarvis’ mother died. Distraught by her loss, Anna committed herself to continue her
mother’s work.

“In 1868,  Ann Jarvis, mother of Anna Jarvis, created a committee to establish a ‘Mother’s Friendship Day’, the purpose of which was ‘to reunite families that had been divided during the Civil War.’ (The senior)
Jarvis – who had previously organized ‘Mother’s Day Work Clubs’ to improve sanitation and health for both Union and Confederate encampments undergoing a typhoid outbreak – wanted to expand this into an annual memorial for mothers, but she died in 1905 before the celebration became popular. Her daughter, who became almost obsessed with her, would continue her mother’s efforts.”

The idea caught on, and with the passage of the proclamation in Congress, soon people were purchasing cards and flowers for Mom and taking her to dinner. Jarvis was appalled by this and spent the rest of her life fighting against what Mother’s Day had become:

“She was arrested in 1948 for disturbing the peace while protesting against the commercialization of Mother’s Day, and she finally said that she ‘…wished she would have never started the day because it became so out of
control …’”

Anna Jarvis lost that battle. Today Mother’s Day is the third most popular day to send greeting cards (eclipsed only by Christmas and Valentine’s Day). It’s estimated that $18.6 BILLION will be spent this year. Approximately 87
percent of all consumers will participate and spend, on average, $152.

So, if you want to honor the Mom’s in your life the traditional way, forgo the commercial cards and just write a note, don’t take her to dinner but do take her to church, give her a carnation and fly the American Flag… and, men, be prepared to sleep on the couch.