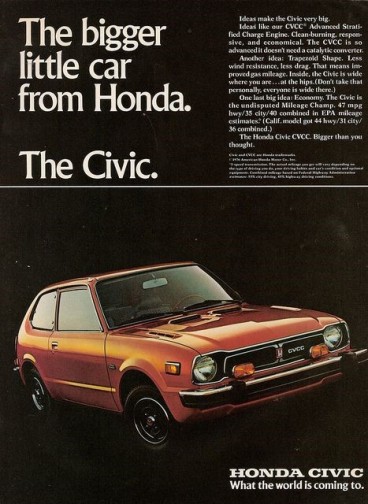 July 14, 1972 marks the date the Honda Civic was introduced. The Civic was, arguably, the beneficiary of a number of factors which catapulted it to the top of the small car class.

It was, however, the energy crisis which gripped the United States in late 1973 and into 1974 that proved to be its best marketing.

Without going down into the weeds as to the political reasons why, in 1974 the world experienced a gas shortage. The typical American of the day drove heavy, gas-guzzling automobiles. With gas costing around 50 cents a gallon, the amount of money it took to fill a tank was very affordable and not something most people considered when purchasing a car. By 1974, however, the price of gas had skyrocketed to $3 and $4 a gallon.

Enter the introduction of the compact and sub-compact car. While the big American automakers quickly rolled out such contenders as the Ford Pinto and the Chevy Vega, it was Japan’s Honda who found the winning formula.  The Civic’s cost, size, and great gas mileage marked a change in thinking in regards to the type of car a large portion of the American public wanted.

Honda Civic’s were everywhere. Their distinctive look – sort of a tiny, boxy car – made them hard to miss. At the time, however, it was other features which made them popular. From the Infallible Wikipedia:

“It was equipped with a 1,169 cc (71.3 cu in) four-cylinder water-cooled engine and featured front power disc brakes, reclining vinyl bucket seats, simulated wood trim on the dashboard, as well as optional air conditioning and an AM/FM radio. The Civic was available as a two- or four-door fastback sedan, three- and a five-door hatchback, as well as a five-door station wagon. Due to the 1973 oil crisis, consumer demand for fuel efficient vehicles was high, and due to the engine being able to run on either leaded or unleaded fuel, it gave drivers fuel choice flexibility over other vehicles.”

On the road in July 1982 at Lewis and Clark Caverns, Montana

In 1982, the hubby and I became a part of the Honda Civic family. The five-door station wagon seemed a great choice. During those years we often took off on weekends to go camping or for brief getaways. That summer, we embarked on a two week trip which took us to several National Parks, including Yellowstone, Grand Teton, and the Grand Canyon. Our little brown wagon served us well, conveying us over 3600 miles. The next year it took us to Vancouver Island and the year after that to Colorado and back. 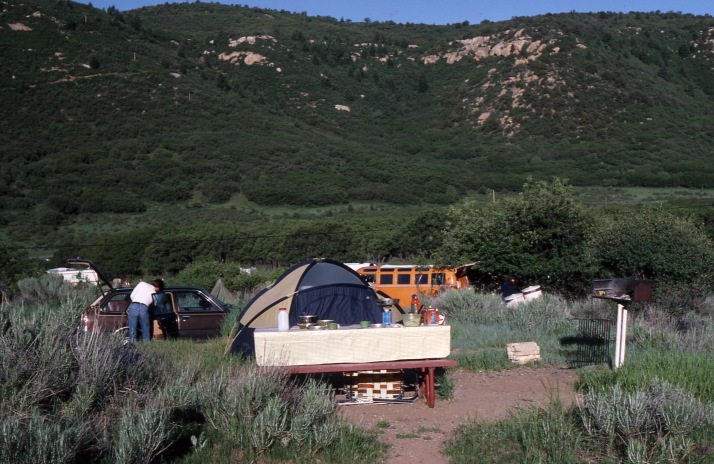 At Mesa Verde, Colorado, in 1984. The hubby is getting something from the car we need for dinner.

It was a great commuter car also: reliable, comfortable, and the always good gas mileage. When we retired the car in 1986 it was not because the car was no longer working but because we had purchased a boat and needed a vehicle capable of towing.

I do wonder if trading in the Honda so we could buy a boat was the right decision, however. There’s a saying that the two happiest days in a boat owner’s life are the day they buy it… and the day they sell it. Our first boat quickly earned its nickname – the Boat From Hell – or BFH as it was abbreviated. But that’s a totally different story.

Our Honda was never the car from hell, but a reliable friend, always ready to travel on a new adventure, never once letting us down. No wonder there were millions of them out on the road.

July 31, 1982 at the Gardiner, Montana, entrance to Yellowstone.