This technology was all the rage

Twenty three years ago, this product was the “be all, end all” in new technology. A year earlier, business people everywhere were snapping these up, sure that they would be the ultimate organization tool. That product was the Palm Pilot – the highly successful Personal Digitial Assistant (PDA) computer you could carry in your pocket.

On March 10, 1997, the second generation Palm products were launched and – much like the latest iPhone or Android phones of today – they were the ‘got to have it’ device of the late 1990’s.

The Infallible Wikipedia tells us:

“Pilot was the name of the first generation of personal digital assistants manufactured by Palm Computing in 1996 (by then a division of U.S. Robotics).

The inventors of the Pilot were Jeff Hawkins, Donna Dubinsky, and Ed Colligan, who founded Palm Computing in 1992. The original purpose of this company was to create handwriting recognition software, named PalmPrint, and personal information management (PIM) software, named PalmOrganizer for the PEN/GEOS based Zoomer devices. Their research convinced them, however, they could create better hardware as well. Before starting development of the Pilot, Hawkins said he carried a block of wood, the size of the potential Pilot, in his pocket for a week. Palm was widely perceived to have benefited from the notable, if ill-fated, earlier attempts to create a popular handheld computing platform by Go Corporation, Tandy, and Apple Computer (Newton).”

Palm – they had to drop the Pilot designation following a legal dispute over the Pilot pen trademark – is a case study of a wildly successful startup. After it was sold to US Robotics, the company switched hands multiple times. Today it is a division of Hewlett Packard. No doubt its founders have prospered financially from their invention.

Personally, I’ve never owned or used a Palm product. Back in the late 1990’s when they were the big thing, I was a Mom just trying to get through each day and making sure my kids were both alive at the end of it. I do recall that there were lots of people who raved about their Palm Pilots and swore they could not live without them. When in meetings or trying to set up something with many of the other people I knew, out would come the device – seems to me there was a little stylus thingy to write on the screen – and it was the only way they seemed to be able to schedule any event in their life.

Me, I was definitely old school. Give me a calendar and a pen – that’s how I did it. And still do. Yes, I have a phone with a calendar app on it. I also have an electronic notepad on that machine. I use both from time to time but for ease of access and speed I have found the following system which works for me. 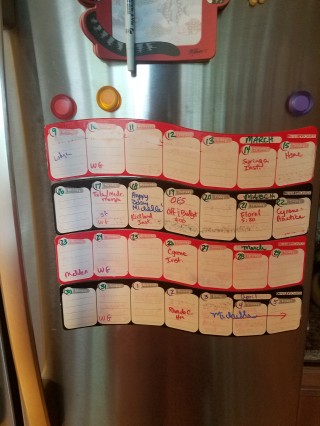 The erasable by week calendar segments on the family fridge

Occasionally, I forget to take the calendar with me. It’s then I will either put dates in the phone or, more likely, send myself an email reminder. Then when I get to my regular computer I will retrieve the information and write it on my calendar.

While technology is great, the advantage of paper for calendars and lists is simple: they never run out of battery power and quickly writing a few details is easier than the hunt and peck of an electronic keyboard.  Of course, anyone who has ever seen my desk knows that I never run out of pens. Or paper.

In 2021 I am becoming a true  calendar recycler. The past few months I’ve been working my way through boxes of old papers. I have assembled, over the years, quite a number of wall calendars. I wondered if, rather than throwing them out, perhaps there were years coming up which had the same date configurations?

Of course there had to be, but how to easily determine which years matched? There’s a website called TimeandDate.com which, for the geeky among us, is just the best. Put in the year of the calendar you have and it will reveal all.

By my calculations the next time I need to buy a calendar is in 4 years with yet another leap year and not having saved a 1996 calendar. 2024 may be the last one I’ll ever have to buy. Being a saver can really pay off.

(Update… a few weeks after I posted this I discovered a couple more paper calendars! Total now stands at 28.)