Illness is a funny thing. Oftentimes our memories of it are sharp and clear – as it has such a profound impact on our lives. And yet our brains play funny tricks on us, causing us to ‘remember’ things that did not occur.

I will forever associate the song Seasons In The Sun with the year I had the hard measles. More about that in a bit. First some information about the song.

Seasons In The Sun was an adaptation of the 1961 song Le Moribund written by Belgian Jacques Brel. Poet Rod McCune wrote the English lyrics. Canadian musician Terry Jacks arranged them to the original tune by Brel. The piece was going to be recorded by the Beach Boys. When they decided not to go forward with the project Jacks, and his then wife Susan, recorded it in December 1973. It hit the top of the Billboard Hot 100 the first week of March, 1974, and spent three weeks in the number one position. According to the Infallible Wikipedia:

“(Terry) Jacks released his version as a single in 1973 on his own label, Goldfish Records. “Put the Bone In”, an original composition about burying a deceased pet dog, was included as the B-side. The single soon topped the record charts in the U.S. (where it was released on Bell Records), in Canada, and the UK, selling over 14 million copies worldwide.

Jacks’ version was released in the United States in December 1973, and made the Billboard Hot 100 a month later. On March 2, 1974, the song began a three-week run at number one atop the Hot 100, and remained in the top 40 until almost Memorial Day weekend. Jacks’ version also spent one week on the Easy Listening charts. Billboard ranked it as the number two song for 1974.  Although he released several other singles that were moderately successful in Canada, “Seasons in the Sun” would become Jacks’ only major solo hit in the United States. In Canada, the single (Gold Fish GF 100) reached number one on the RPM Magazine charts January 26, 1974, and remained there four weeks.

Though the song enjoyed contemporary success, modern criticism takes a dimmer view, considering it overly sentimentalized. Jacks’ version has been held up as an example of bad music, such as having been listed as one of the worst pop songs ever recorded and ranking number five in a similar CNN poll in 2006.”

Now regardless of how one might feel about the song, it was memorable and played perfectly into the baby boomer consciousness of 1974. We were all a bit melodramatic and, as is often the case for teenagers, had become aware of our own mortality. The song preyed on that understanding.

My 1972 diary entry which chronicled the beginning of the measles

Enter my own faulty memories. On February 20th I got very sick, and did not return to school until February 29th; I have a distinct memory of laying in bed in my darkened room. I had the hard measles, a case so severe they had settled everywhere including my eyes. The only thing I would or could eat were milkshakes which my mother made for me… I eventually refused even those. I found out much later that she sneaked chocolate protein drink mix into them to try and boost their nutritional value. This totally changed the flavor rendering them undrinkable. (Pro tip to parents: when your skinny teenager is lying in bed running a 103 degree fever for over a week, that is not the time to be concerned about nutrition. Calories are what matters, especially when said child is 5’7 and weighs 110 pounds to start and ends up losing 20 pounds…)

But back to the song. I spent my illness with my deceased grandmother’s old black and white TV set up near my bed, watching whatever I could get on the few channels. One night, unable to sleep, I happened upon a particularly disturbing horror film, Village of the Damned. I read the book The Search for Bridey Murphy. I was in a really, really dark place emotionally. And I was positive that as I lay in bed that last week of February, it was Terry Jack’s Seasons in the Sun which added to that dark place as I contemplated not surviving the measles.

But Season’s in the Sun was a faulty memory. I was sick in late February 1972… and Season’s in the Sun didn’t hit the airwaves until 1974. Perhaps there was another illness in 1974 which took me down for a couple days when I listened to that song. To this day those depressing lyrics are implanted on my brain and associated with the 1972 illness. And I’ve always wondered WHY the junior class at my high school thought it would be a good theme for prom my Senior year.  I’ll wait IKE class of 1976 for the explanation. 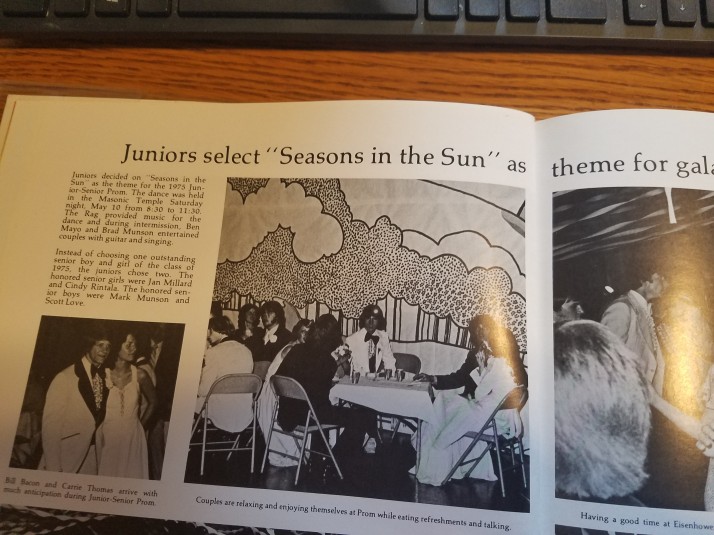 This past week I’ve been sick with an upper respiratory ailment. There have been moments when I thought I would cough up my lungs. I’ve wondered is it or is it not Coronavirus? I called the Dr.’s office and got what I wanted: a series of questions as to my symptoms and confirmation that, although it’s not pleasant, it is not Coronavirus. Based on how I’m feeling today, I think I’ll live.

And my reading and TV viewing habits? Way better than in 1972. This past week, I enjoyed a nice upbeat LaVyrle Spencer novel – Small Town Girl – and have watched hours and hours of HGTV programs as well as the Hallmark Movie Channel and American Pickers. I’ve crushed candy and found Pokemon lurking in my house. And slept. I think I might be on the other side of it… just in time to take care of the hubby as he begins his week long odyssey. Poor guy.

Several links for all the obscure cultural references this week: