He was the unlikeliest of stars. From his wire rimmed granny glasses, to his bowl cut hair, and his nasally voice, this introvert took the pop world by storm in the mid 1970’s. Henry John Deutschendorf Jr., however, possessed two qualities which proved to be the essential ingredients necessary for success: he could write songs and he was persistent.
.

The world, of course, knew him as John Denver. Born on New Year’s Eve 1943 in Roswell, New Mexico, one can wonder if some other world force was at play when he arrived in this world.
.
His childhood was not an easy one. His father, being a Captain in the Air Force, was moved every two years which prevented Denver from forming strong friendships. Denver, however, found his talent and his solace in the guitar given him on his eleventh birthday from his grandmother. From the Infallible Wikipedia:
.
“He learned to play well enough to perform at local clubs by the time he was in college. He adopted the surname ‘Denver’ after the capital of his favorite state, Colorado. He decided to change his name when Randy Sparks, the founder of The New Christy Minstrels, suggested that ‘Deutschendorf’ would not fit comfortably on a marquee. Denver attended Texas Tech University in Lubbock and sang in a folk-music group called ‘The Alpine Trio’ while pursuing architectural studies. He was also a member of the Delta Tau Delta Fraternity. Denver dropped out of the Texas Tech School of Engineering in 1963 and moved to Los Angeles, where he sang in folk clubs. In 1965, Denver joined the Mitchell Trio, replacing founder Chad Mitchell. After more personnel changes, the trio later became known as ‘Denver, Boise, and Johnson’ (John Denver, David Boise, and Michael Johnson).”
.
In the late 1960’s Denver self produced a number of songs he’d written and gave them out as Christmas presents. Included on this record was one titled Babe I Hate To Go. When Milt Okun, Denver’s producer of his recently released RCA album Rhymes and Reason heard the song, he pitched it to the popular trio of Peter, Paul, and Mary. The song’s title was changed to Leavin’ On A Jet Plane and catapulted to number one on the Billboard Hot 100.
. 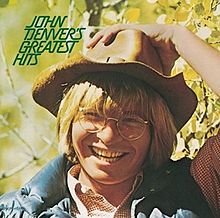 But RCA was not actively promoting Denver’s album via a tour, so the persistent Denver took matters into his own hands. Also from the Infallible Wikipedia:
.
“Denver himself embarked on an impromptu supporting tour throughout the Midwest, stopping at towns and cities as the fashion took him, offering to play free concerts at local venues. When he was successful in persuading a school, college, American Legion hall, or local coffee house to let him play, he would spend a day or so distributing posters in the town and could usually be counted upon to show up at the local radio station, guitar in hand, offering himself for an interview. With his foot in the door as author of ‘Leaving on a Jet Plane’, he was often successful in gaining some valuable promotional airtime, usually featuring one or two songs performed live. Some venues would let him play for the ‘door’; others restricted him to selling copies of the album at intermission and after the show. After several months of this constant low-key touring schedule, however, he had sold enough albums to persuade RCA to take a chance on extending his recording contract. He had also built a sizable and solid fan base, many of whom remained loyal throughout his career.”
.
It was his album, Poems, Prayers, and Promises, released in 1971 which sent his career soaring. The single Take Me Home, Country Roads proved popular and peaked at number two on the charts.
.
The highlight of Denver’s career was in 1974 and 1975 with a series of number one hits, solidifying him as a superstar: Sunshine on My Shoulders, Annie’s Song, Thank God I’m a Country Boy, and I’m Sorry. Additionally, he had three number one albums in the same era, starred in a number of TV specials and performed opposite George Burns in the movie Oh, God.
.
In all, Denver wrote hundreds of songs and produced more than 50 albums. Of his 44 released singles, 11 became number one hits.
.
There is  much, much more to his story and I encourage my readers to visit the John Denver website and read the Wikipedia overview. (links below)
.
I had heard Denver’s songs during my early teens but dismissed them as country. It was in 1973, however, that I understood how his songs had impacted the culture. I was over at my best friend Daphne’s house and she walked out of her bedroom carrying his Greatest Hits album and we listened to it together.
.
From then on I was a fan and found in his music a troubadour who captured the emotions of life in his insightful lyrics and memorable tunes.
.
Many of the guys I knew sported wire rimmed glasses and Denver-esque hairdos. I even made a shirt for my boyfriend in the style Denver wore.
.
.
Of all his songs my favorite is Looking For Space. In it, Denver captures some elemental truths about the nature of people and life.
.
When Daphne, a triplet, unexpectedly lost one of her two brothers in the fall of 2017, it was this song I shared with her in memory of him… and when I lost my Dad earlier this year, she evoked the emotions of that song for me by painting this picture. 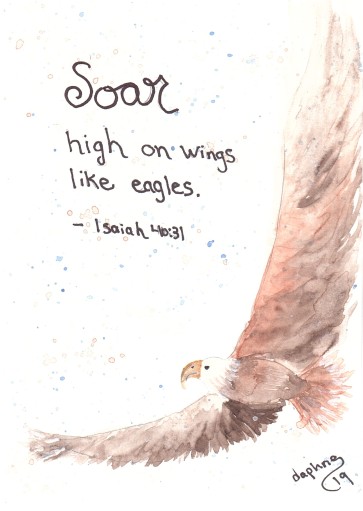 https://en.wikipedia.org/wiki/John_Denver_discography
https://johndenver.com/
.
None of us can know the triumphs and trials which await us in the New Year. Live each day to the fullest my friends.