At 3 p.m. on Monday, December 24th, 1923, an American tradition began which continues to this day. That event was the lighting of the first National Christmas tree.

Now, 96 years later, the event occurs earlier in the month – this year on December 5th – as it has since 1954 during a month long event known as the Pageant of Peace. But back to the beginning.

The concept of a National Christmas tree was the idea of Frederick Morris Feiker, an engineer with General Electric. He, along with Vermont US Senator Frank L. Greene, convinced President Calvin Coolidge to light the tree.

Alumni of Middlebury College in Vermont paid for the transport of a 48 foot tall balsam fir to be transported to Washington, D.C. with GE providing 2,500 green, red, and white electric lights. 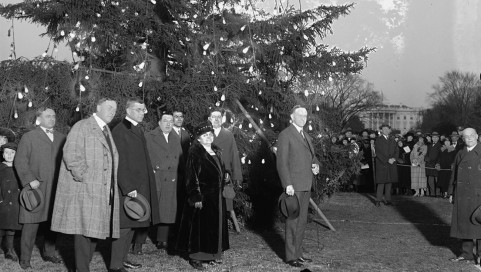 “At 3 p.m. on December 24, 1923, a 100-voice choir from the First Congregational Church assembled on the South Portico of the White House and began a two-hour concert of Christmas carols. At 5 p.m. (dusk) on Christmas Eve, President Coolidge touched a button at the foot of the tree which lit the lights and electric candles adorning the tree, but he did not speak. A searchlight from the nearby Washington Monument was trained on the tree to help illuminate it as well. The Coolidge family invited citizens of the city to sing Christmas carols on the Ellipse after dark. Between 5,000 and 6,000 people thronged the park, joined by 3,000 more people by 9 p.m. The crowds were joined by the Epiphany Church and First Congregational Church choirs, which sang carols, and the Marine Band played Christmas-themed music. The singing ended shortly before midnight. After the white residents of the city had dispersed, African American residents of the city were permitted on the park grounds to see the National Christmas Tree. An outdoor Christian worship service was held, and a mass choir composed of signing groups from area community centers sang more Christmas carols. An illuminated Christian cross was flashed on the Washington Monument, and men dressed as shepherds walked from the National Christmas Tree to the monument.”

The following year Coolidge objected to cutting down a tree for the event so a 35 foot tall live Norway Spruce was located and planted in a new location near the Treasury Building. This tree survived until 1929 when it was determined that the plant had been damaged and needed to be replaced. This began a series of live trees being planted, dying, and being replaced until, in 1934, the last tree was cut down in that location.

In December 1934, the tree and the ceremony were moved to Layfayette park, north of the White House. There it remained for only a few short years before returning to its original site on the Ellipse where it remains to this day. Over the years there have been many, many trees which have served in the role. Additionally, the ceremonies and events associated with it have become quite extensive. If you’d like to read more about its history, here’s the Wikipedia link https://en.wikipedia.org/wiki/National_Christmas_Tree_(United_States) and also the link to the official website https://thenationaltree.org/lighting-ceremony/2019-national-christmas-tree-lighting-ceremony/.

Although I’ve never seen the National Tree, I do love driving around during the Christmas season and viewing all the wonderful outdoor decorations. There is nothing quite so beautiful as a blue spruce or fir tree at night covered with lights AND an inch or two of snow on its branches.

My first memory of such a tree was when I was probably 7 or 8. My bedroom in Yakima faced towards our backyard. Our neighbor, Ray Broten, spent a lot of time keeping his yard perfect. No matter the season, his was always manicured and trimmed to perfection. That particular December, the spruce tree located in the southwest corner of his backyard cut through the darkness with blue, green, red, and white lights, illuminating my bedroom each night. After I went to bed there was many a time I stole back over to the window and just stood and looked out at his beautiful tree. My favorite nights were when a soft snow was falling, muting the darkness with a blanket of white. 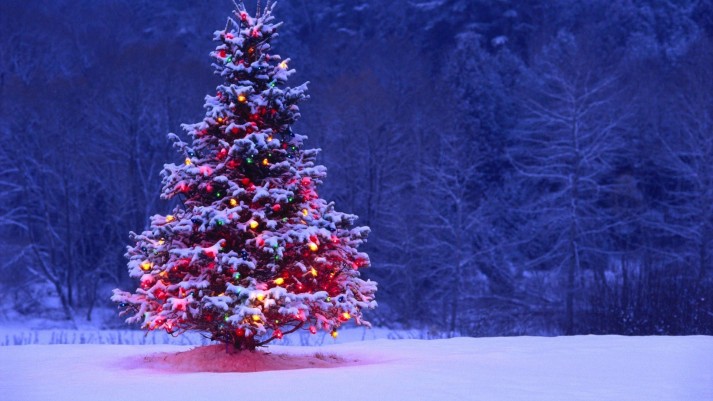 When I got too cold, I’d crawl back in to bed, and as I warmed up and drifted off to sleep, the shine of those lights would bathe the room with a soft glow.

This tradition continued for a number of years until the time I moved away from Yakima. Although those years are long ago, the memory is etched with clarity as Mr. Broten unknowingly created one of my fondest recollections.

May your Christmas also be one of wonderful reminiscences and the creation of new memories. Merry Christmas one and all.