A Visual Feast each April

The first tulip bulbs were brought to the Skagit Valley from Holland in 1906 by Mary Brown Stewart. Soon she had a mail-order bulb business, selling them to garden clubs in New England.  Her son, Sam, joined the operation 20 years later which coincided with a ban by the Federal government on bulbs imported from Holland.

This event triggered many of the bulb growers to send family members to the United States to establish farms. Through trial, error, and success, the bulb growers discovered that the Skagit Valley was a prime bulb growing region, eclipsing Bellingham and Lynden, Washington, where colder winters were not ideal for the plants.

In the late 1940’s, the embargo was lifted and, once again, the Skagit Valley bulb growers were impacted with many of the smaller farmers forced out of business.

“In 1946, William Roozen arrived to the United States, leaving behind a successful bulb-growing business spanning six generations in Holland. After working on several different farms, Roozen started his own in Skagit County in 1950, and in 1955 purchased the Washington Bulb Company, making him the leader among the four flower-growing families in the area, and the Washington Bulb Company the leading grower of tulip, daffodil, and iris bulbs in North America. The farm operates a public display garden and gift shop called Roozengaarde, which, alongside the DeGoede family’s Tulip Town, is a major attraction during the Tulip Festival.

Local tulip growers showcased their bulbs through display gardens for decades prior to the formation of an official festival. The Mount Vernon Chamber of Commerce established the Skagit Valley Tulip Festival as a 3-day event in 1984 to add festivities during the bloom month. The event has since grown to a month-long event and coincides with street fairs, art shows and sporting events.” 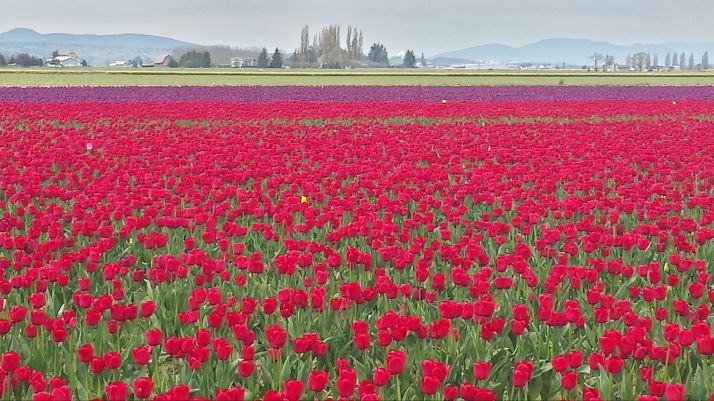 Now in its 36th year, the Tulip Festival, has become one of the most popular events in the state. Weekends in April produce traffic jams in Mount Vernon which rival a bad morning commute in Seattle. The festival organizers estimate that nearly a million people will trek to see the tulips during April. A look at their website, tulipfestival.org, provides a list of hundreds of events throughout Skagit County, helpful ‘bloom’ maps, and lists of where to eat and stay.

The Hubby and I visited the tulip festival offices a couple days ago (I was researching for this article) and the steady stream of people coming in to obtain information was amazing. We were talking with one of the volunteers – a friend we know through a different organization – and he said that there are times when the crowds spill out on the sidewalk.

We left after purchasing three prints of previous years Tulip Festival posters and then headed out on what has become one of the things the Hubby and I ‘do’ together which is drive around the valley.

It was, once again, another magical day. We found a flock of well over a thousand snow geese (they will be gone by mid-May) in a field on Fir Island and were treated to an aerial display which took my breath away. From there we drove up a hill to the west of the flower fields and could see the ribbons of red, yellow, purple, and white cut across the expansive landscape.

We visited a daffodil field which, two weeks ago, had been a cheery harbinger of spring but now the flowers were mostly faded. From there we ventured to ground zero, noting that although there were crowds, they were not yet of the epic proportion expected the next two weekends. The red and yellow tulips were approaching full bloom but the purple, white, pink, and variegated ones were still a week or two away.

The author with tulips in 2018 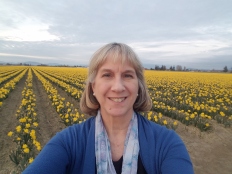 The author, at the same field, but now daffodils, 2019

Last year we, having just moved in, didn’t visit Roozengaarde or the other large player, Tulip Town. But this year we plan to be ‘tourists’ for a day and visit one or both to get the entire Skagit experience. But not on a weekend. We’re not THAT crazy.

For those who want to come see the tulip fields in bloom, visit the official tulip festival website:

For more information on Washington Bulb company and the Roozen family:

And the Infallible Wikipedia: