I heard some Rumours…

This album sat atop the Billboard charts for 31 non-consecutive weeks in 1977 and early 1978. Its chart dominance began on April 2, 1977 and, according to one of the principles of the group who recorded it, it was “the most important album we ever made.” 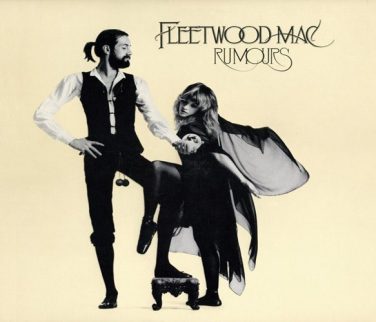 The album was Rumours and the group Fleetwood Mac.

Theirs is a story which shows that finding the right blend of talent, relentless commitment, and a lot of hard work, are necessary to make it in the music industry. The Fleetwood Mac story begins in 1967 as explained in the Infallible Wikipedia:

“Fleetwood Mac was founded by guitarist Peter Green, drummer Mick Fleetwood and guitarist Jeremy Spencer. Bassist John McVie completed the lineup for their self-titled debut album. Danny Kirwan joined as a third guitarist in 1968. Keyboardist Christine Perfect, who contributed as a session musician from the second album, married McVie and joined in 1970. At this time it was primarily a British blues band, scoring a UK number one with ‘Albatross’ and had lesser hits with the singles ‘Oh Well’ and ‘Black Magic Woman’. All three guitarists left in succession during the early 1970s, to be replaced by guitarists Bob Welch and Bob Weston and vocalist Dave Walker. By 1974, all three had either departed or been dismissed, leaving the band without a male lead vocalist or guitarist.”

The group was plagued by skullduggery from their manager, drug and alcohol addictions of some band members, departures of multiple guitarists, and an inability to make it big as a British Blues band. Then, in 1974 the band moved to Los Angeles. It was in that moment the magic began to happen. Also from the Infallible Wikipedia:

“After (Bob) Welch announced that he was leaving the band, Fleetwood began searching for a replacement. While Fleetwood was checking out Sound City Studios in Los Angeles, the house engineer, Keith Olsen, played him a track he had recorded in the studio, ‘Frozen Love’, from the album Buckingham Nicks (1973). Fleetwood liked it and was introduced to the guitarist from the band, Lindsey Buckingham, who was at Sound City that day recording demos. Fleetwood asked him to join Fleetwood Mac and Buckingham agreed, on the condition that his music partner and girlfriend, Stevie Nicks, be included. Buckingham and Nicks joined the band on New Year’s Eve 1974, within four weeks of the previous incarnation splitting.”

With the new members in place, the band took to the studio to record their (second!) self titled album, 1975’s “Fleetwood Mac.” It was a commercial success, selling over 7 million copies and featuring the memorable tracks: Over My Head, Say You Love Me (vocals Christine McVie), Rhiannon,  and Landslide (vocals Stevie Nicks).

In many ways, the two women’s distinctive voices came to define the group’s sound and propel their musical style towards mainstream pop.

With the release of Rumours in January 1977 and its subsequent rise to the top of the Billboard album charts, Fleetwood Mac cemented their spot in the Rock and Roll history books. The Infallible Wikipedia gives the details:

“By 1980, 13 million copies of Rumours had been sold worldwide. As of 2013, sales were over 40 million copies. As of May 2016, Rumours has spent 630 weeks in the UK Top 75 album chart and is the 11th best-selling album in UK history and is certified 13× platinum by the British Phonographic Industry, the equivalent of 3.9 million units shipped. The record has received a Diamond Award from the Recording Industry Association of America for a 20× platinum certification or 20 million copies shipped, making it, as of 2012, the joint fifth best-selling album in US history (by number of copies shipped).” (Ed note: it is still, as of 2019, one of the top ten best-selling albums of all time)

Although the group has continued to record and perform over the years, with some members leaving, new ones coming in, and then old ones rejoining, those of us of a certain age no doubt think of Fleetwood Mac as the following five individuals who were the group in 1977: Mick Fleetwood, Christine McVie, John McVie, Stevie Nicks and Lindsey Buckingham.

During a foray in to Value Village (a Western Washington thrift store) about a year ago I was – as is my habit – perusing the used CD’s when I spied it: Fleetwood Mac – Greatest Hits. I plucked the CD from the shelf and spirited it home. Last fall when the hubby and I were about to embark on a three week, three thousand mile, road trip, I was forced to reduce down my box of ‘hitchhikers.’ This is what I lovingly call the approximately 25 CD’s which travel with me to Yakima and back every couple of weeks.

The purge process involved looking at every CD we own (who knows 100? 150? 200?) and determining which of the CD’s deserved a place in the box and which had a cut or two to be recorded onto a thumb drive. One by one I evaluated with the thumb drive pile growing ever higher and the box group getting smaller. “Would I,” I asked myself with each CD, ” listen to every song on this?”

There were only a handful which met that standard…  FM’s Greatest Hits was one of them. And so it remains in the box of hitchhikers. My only wish is that “Landslide” had been included on the CD as it is, by far, my favorite of their songs.

For those not familiar with it, here it is. Enjoy!

The FM story is fascinating and far too much to include in my weekly blog. Thankfully Wikipedia provides exhaustive information for those interested:

When I first posted this three years ago, I had asked a few questions on Facebook. Couldn’t now tell you the question, but here is the answer: these five albums stayed at number 1 on the album charts longer than any others since the mid-1950s.