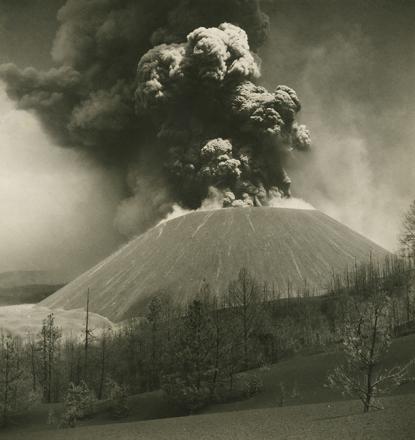 Geologically, nine years is a very short time period. But for farmer Dionisio Pulido of Paricutin, Mexico, the event which began at 4 p.m. on February 20, 1943, forever altered his life.

As he is quoted in the infallible Wikipedia:

“‘At 4 p.m., I left my wife to set fire to a pile of branches when I noticed that a crack, which was situated on one of the knolls of my farm, had opened . . . and I saw that it was a kind of fissure that had a depth of only half a meter. I set about to ignite the branches again when I felt a thunder, the trees trembled, and I turned to speak to Paula; and it was then I saw how, in the hole, the ground swelled and raised itself 2 or 2.5 meters high, and a kind of smoke or fine dust – grey, like ashes – began to rise up in a portion of the crack that I had not previously seen . . . Immediately more smoke began to rise with a hiss or whistle, loud and continuous; and there was a smell of sulfur.’

“He tried to find his family and oxen but they had disappeared so he rode his horse to town where he found his family and friends, happy to see him alive. The volcano grew fast and furiously after this.   Celedonio Gutierrez, who witnessed the eruption on the first night reported:

‘…when night began to fall, we heard noises like the surge of the sea, and red flames of fire rose into the darkened sky, some rising 800 meters or more into the air, that burst like golden marigolds, and a rain like artificial fire fell to the ground.’”

And thus began a eruption which provided scientists an opportunity to study and record how a  volcano is formed. During this time the volcano not only destroyed Pulido’s farm but forced the permanent evacuation of two towns, caused the deaths of three people (but not the farmer!), grew to 1341 feet, and allowed scientists to witness the entire life cycle of a volcano.

Also from the infallible Wikipedia:

“The importance of the Parícutin eruption was that it was the first time that volcanologists were able to fully document the entire life cycle of a volcano. The event brought geologists from all over the world,  but the principal researchers were William F. Foshag of the Smithsonian Institution and Dr. Jenaro Gonzalez Reyna from the Mexican government, who came about a month after the eruption started and stayed for several ye 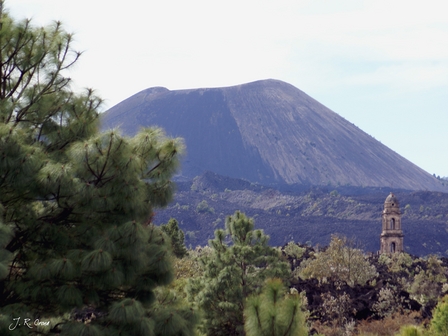 ars. These two wrote detailed descriptions, drew sketches and maps and took samples and thousands of photographs during this time. Many of these are still used today by researchers. Foshag continued to study the volcano until his death in 1956. Between 1943 and 1948, almost fifty scientific articles were published in major journals about the volcano, with even more since. The worldwide effort to study Parícutin increased understanding of volcanism in general but particularly of scoria cone formation.”

As a child I have a distinct memory of sitting in a darkened classroom and watching a documentary about this event. In elementary school it was always a favorite moment when one of the Audio Visual (AV) helpers wheeled the tall cart into the classroom. Atop the cart was a black and white TV connected by wires to a 1960’s version of video equipment. Off would go the lights and some item of interest would flicker to life. 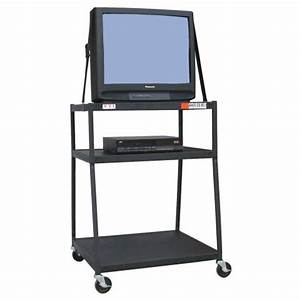 As a child seeing a volcano literally grow out of the ground where nothing had been was terrifying. Could that happen in MY backyard? Being that my natural state was to worry about such things I’m pretty certain I was quite concerned  for my home. Over the years I, no doubt, saw dozens of programs this way but none ever made quite the same impression on me.

Thankfully Yakima was not prone to sudden volcanic eruptions and my family was able to live in blissful calm… until May 18, 1980. But THAT is a story for another day.

For those who want to learn more:

Not sure if this is the video I saw but the music alone is enough to instill terror into a child….