Here We Come, Walkin’ down the street…

The argument could be made that this group – a made for TV boy band – was like the Rodney Dangerfield of rock and roll: “I don’t get no respect.”

And now, 51 years after their TV program debuted, one could also argue that perhaps there was a bit more to them then the critics said at the time.

I’m talking, of course, about the Monkees. The TV show premiered on September 12, 1966 and, in combination with the release of their first single “Last Train To Clarksville” was an immediate hit with girls of a certain age. That age would have been from about 8 to 14 years old. 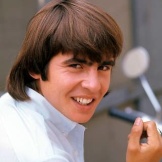 But back to the critics and how the group came to be. The idea was to put together an American based band of four guys in an attempt to capitalize on, and compete with, the success of the Beatles. The four (pictured here clockwise starting top left  – Davy Jones, Micky Dolenz, Peter Tork, and Michael Nesmith – were all musicians and actors. All took themselves seriously in their pursuit of a career.  At the time Jones was a somewhat successful actor having played the role of the Artful Dodger in the musical “Oliver” and with his British accent and good looks was already cast for the TV show.  An ad was run in the Hollywood Reporter for the rest of the band.

According to the infallible Wikipedia:

Out of 437 applicants, the other three chosen for the cast of the TV show were Michael Nesmith, Peter Tork and Micky Dolenz. Nesmith had been working as a musician since early 1963 and had been recording and releasing music under various names, including Michael Blessing and ‘Mike & John & Bill’ and had studied drama in college. Of the final four, Nesmith was the only one who actually saw the ad in Daily Variety and The Hollywood Reporter. Tork, the last to be chosen, had been working the Greenwich Village scene as a musician, and had shared the stage with Pete Seeger; he learned of The Monkees from Stephen Stills, whom Rafelson and Schneider had rejected as a songwriter. Dolenz was an actor (his father was veteran character actor George Dolenz) who had starred in the TV series Circus Boy as a child, using the stage name Mickey Braddock, and he had also played guitar and sung in a band called the Missing Links before the Monkees, which had recorded and released a very minor single, ‘Don’t Do It’. By that time he was using his real name; he found out about The Monkees through his agent.”

No doubt the four must have felt as though they hit the jackpot. Their success was almost immediate as their music resonated with the pre-teen group especially, catapulting them to the top of the music charts. As it turned out it was their music – and not the zany TV show – which proved to be the foundation for their success.

The entire Wikipedia article is worth a read if for no other reason than to gain a better understanding of the almost unbelievable story of the Monkees and their quest to be taken seriously: https://en.wikipedia.org/wiki/The_Monkees

Monkeemania gripped me when, as a pre-pubescent 9 year old in the fall of 1966, all my friends were enthralled by the group. My mother, however, was appalled and banned my sister and me from watching it. But that didn’t stop us. Somehow we managed to show up at our neighbor Diane’s house at 7:30 p.m. on the appropriate week night to watch the contraband program.

Our little neighborhood group was so gripped by Monkees fever that we even pretended to BE the group. Diane – our ring leader – got to be Davy Jones; my sister, Susan, wore a stocking cap and assumed the role of Michael Nesmith; our year younger neighbor, Andi, was Micky Dolenz; and, me, because of my straight blonde hair, was assigned the role of Peter Tork. I was not thrilled with that assignment as, like most of the girls, Davy was THE one we thought was the best. But then again I did get to be a member of the band!

Although the TV show only ran for two seasons, the Monkees music still resonates today. I think you could argue that it was Nesmith who seized the opportunity to make the band more than a silly sitcom. He pushed and fought for legitimacy his entire career. And although there are still naysayers it’s hard to argue with the band’s success:

The boy bands of today have nothing on the Monkees.