According to the Infallible Wikipedia the invention of the Ice Cream Sundae is disputed. The town of Two Rivers, Wisconsin asserted the concoction was created as follows:

“Two Rivers’ claim is based on the story of George Hallauer asking Edward C. Berners, the owner of Berners’ Soda Fountain, to drizzle chocolate syrup over ice cream in 1881. Berners eventually did and wound up selling the treat for a nickel, originally only on Sundays, but later every day. According to this story, the spelling changed when a glass salesman ordered canoe-shaped dishes. When Berners died in 1939, the Chicago Tribune headlined his obituary ‘Man Who Made First Ice Cream Sundae Is Dead’.  Two Ithaca High School students, however, claim that Berners would have only been 16 or 17 in 1881, so it is therefore “improbable” that he would have owned an ice cream shop in that year. They also state that the obituary dates Berners’ first sundae to 1899 rather than 1881.

Residents of Two Rivers have contested the claims of other cities to the right to claim the title ‘birthplace of the ice cream sundae’. When Ithaca, New York, mayor Carolyn K. Peterson proclaimed a day to celebrate her city as the birthplace of the sundae, she received postcards from Two Rivers’ citizens reiterating that town’s claim.”

The rival towns who also claim they were first are Buffalo and Ithaca, New York and Evanston and Plainfield, Illinois.

So how did it come to be called an Ice Cream Sundae? Mostly it can be traced back to the “Blue Laws” which were in place in the 1800’s. Carbonated Soda water – like alcohol – was considered inappropriate for consumption on the Sabbath. Because Ice Cream Soda’s could not be sold on Sunday in Evanston and Plainfield Illinois particularly, the inventive soda fountain owners began selling ice cream with the syrup poured over it – sans the soda – and thus created the first ice cream sundaes in that state. Rather than call it a ‘Sunday’ which was considered shocking, the spelling was changed to the now instantly recognizable ‘Sundae.’

I’m not sure who decided to pour hot chocolate over ice cream and create the hot fudge sundae, but it’s a good thing they did. Nothing quite says summer like a couple scoops of ice cream, hot fudge, and whipping cream with a cherry on top! 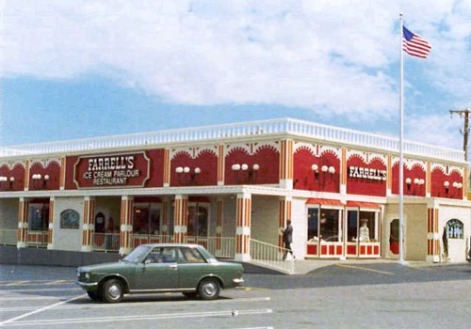 Back in my teen years a real treat was to get to go to Farrell’s – an ice cream and burgers restaurant which hearkened back to the days of the Soda Fountain. This was a special event for this kid from Eastern Washington as there was not a Farrell’s in Yakima. We looked forward to the rare trips to Seattle and surrounds because it often meant that we could go gorge ourselves on ice cream. In addition to hot fudge and other Sundaes, Farrell’s staff would sing happy birthday if you were so lucky to be there on your big day. Heaven help you if you ordered the Pig Trough. It was a dozen scoops of ice cream and the rule was that YOU had to eat it all by yourself! Finish it and you were awarded a badge which said “I made of Pig of myself at Farrell’s” and the workers would parade through the restaurant with kazoos and much fanfare to celebrate your achievement. I was never so brave to order a Pig’s Trough!

Going to Farrell’s capped off the annual summer convention where a few thousand Rainbow Girls and their chaperones would gather each year. On the last night of the event, literally hundreds of girls would descend upon the Farrell’s in Tukwila? Tacoma? Spokane? ( I cannot recall the exact locations any longer!) and take over the restaurant. Truly, the staff did not know what hit them. 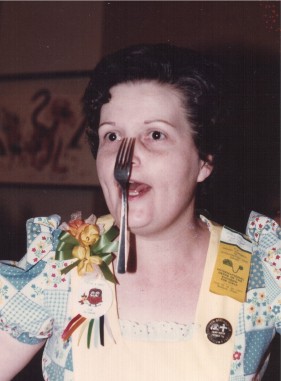 One of my favorite memories of Farrell’s (I think it was Farrell’s) was when one of our adult advisors taught us all how to balance a fork on our nose. That was the sort of silliness we enjoyed. This photo of her doing just that  is probably from the last time I went to a Farrell’s.

I rather doubt any one would open a restaurant like Farrell’s in today’s world. It was sure a lot of fun but healthy?

For more information about ice cream Sundaes and their many variations and history click here: https://en.wikipedia.org/wiki/Sundae

Or for a brief history of Farrell’s click here: http://oldlarestaurants.com/farrells/