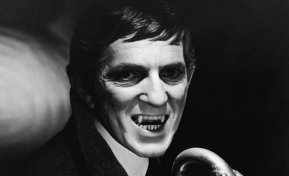 Ask any person of my generation if they know who Barnabas Collins is and you are likely to get an enthusiastic response something to the effect of:

“I made sure I was home by 4 o’clock every day so I wouldn’t miss an episode.”

The aforementioned Barnabas was, by any definition, the romantic hero of the always melodramatic Dark Shadows. One look at his face and you might ask yourself “Really?”

Hold that thought. We’ll get back to his appeal in a bit.

June 27, 1966 marked the date when Dark Shadows premiered on ABC. The show, originally cast in black and white, captured the imaginations of millions of teens and pre-teens and became ‘must watch’ TV.  In the course of its five year run, 1,225 episodes were aired.  Like other daytime soap operas it featured storylines which took months to resolve and characters that became household names. But unlike any other shows at that time it was centered on vampires and werewolves, time travel and alternate existences.

“Perhaps one of ABC’s first truly popular daytime series, along with the game show Let’s Make a Deal, Dark Shadows found its demographic niche in teenagers coming home from school in time to watch the show at 4 p.m. Eastern / 3 p.m. Central, where it aired for almost all of its network run, the exception being a 15-month stretch between April 1967 and July 1968, when it aired a half-hour earlier. Originally, it was aired in black-and-white, but the show went into color starting with the August 11, 1967 installment transmission. It became one of ABC’s first daytime shows to actually win its timeslot, leading to the demise of NBC’s original Match Game and Art Linkletter’s long-running House Party on CBS, both in 1969.”

Dark Shadows reached its peak in March 1969. It was in those episodes when Barnabas figured prominently and was romantically involved with Angelique Bouchard. One particular episode stands out.

Barnabas was in love with the blonde beauty and he takes her to his room. Ahem.  Barnabas is conflicted as he wants to be with her but is concerned his passion will carry him away and he will ‘bite’ Angelique’s neck, thus killing her and she, too, will become a vampire.  An outcome he does not want.  I cannot recall if he did or did not bite her but I do recall that the show implied that the two of them engaged sexually. Powerful stuff for a kid of 12.

Barnabas did not have to be young or classically handsome as he was a compelling character and we Dark Shadow’s fans were completely enthralled.

I know that Dark Shadows influenced me as a writer. The power of the show was derived by what was left out; the idea of mysterious forces at work which left much to the imagination. In the late 1960’s and early 1970’s you couldn’t air a program that showed explicit acts and that, I think, was a good thing.

For viewers, and readers, our imagination is what fuels the enjoyment we derive from a compelling TV show or well told story in a novel.

All but a few of the Dark Shadows episodes survive. I’m pretty sure if I were to watch them now the mystique would evaporate. Instead, I choose to let the snippets of remembered scenes live in my brain to serve as inspiration.

If you wish to learn more, here’s the Wikipedia link: https://en.wikipedia.org/wiki/Dark_Shadows