Not A Creature Was Stirring, Not Even Chris Mouse

When Hallmark introduced these in 1973, no one could even begin to imagine how, over the next 40 plus years, the company would lead the industry through an unprecedented demand for Christmas ornaments.

That first year, Hallmark only had 18 different ornament designs available for sale. Apparently buoyed by the success of sales that year, however, the collectible ornaments were expanded the next year. Betsey Clark – a popular artist featuring whimsical big eyed children- had two entries that year, up from one the year before. Seen also for the first time were scenes from Currier & Ives as well as an iconic Norman Rockwell holiday painting. The number of balls was tripled but yarn figures – prominent the first year – were only half of what they’d been in 1973.

It went this way for several more years with more and more Ornament balls being offered… but with a catch. A shopper could not just walk into a Hallmark store or retailer and purchase the exact same ornament they saw the previous year. Each ornament incorporated the production year into the design. Once the baubles were sold out, that was it.

The introduction of annual ornament series spurred interest. Each fall, collectors would rush to the store to snap up the newest one.

Surprisingly (at least to this author) is that the Infallible Wikipedia does not have a page devoted just to the Hallmark phenomenon. It does, however, offer up this information on a more generic page:

In 1996, the ornament industry generated $2.4 billion in total annual sales, an increase of 25% over the previous year. Industry experts estimated more than 22 million US households collected Christmas ornaments, and that 75% of those households collected Hallmark Keepsake Ornaments.”

And, according to the official Hallmark webpage, “What began as glass balls and yarn figurines has grown to more than 8,500 ornaments past and present, and a reputation for quality, craft, and above all, spirit.”

My first foray into the world of Hallmark ornaments began, coincidentally, the year I got married. During a trip into Hallmark I happened to go peruse the ornament section and, there it was, the perfect ornament to commemorate a couple’s first Christmas together.

I had to have it despite the fact that it was an extravagance not in the budget. The hubby was okay with the purchase of it and even another one which featured everyone’s favorite Christmas mouse, Mickey.

From that initial addictive purchase came more. Two more Hallmark ornaments were acquired in 1981. It was 1985, however, when things started to ramp up in my household.

That year saw the introduction of an ornament titled ‘Chris Mouse.’

Mr. Mouse was just about the most adorable creature you’d ever seen. His tiny little self was wearing what looked to be a sky blue night shirt and a red night cap. In his teeny hands he held a hunter green book with ‘1985’ on the cover in gold. But best of all was that he was sitting at the base of an old fashioned gold candle holder, leaning against a 4 inch tall red candle. At the top of the candle glows a yellow ‘flame’ which, when the ornament’s cord is plugged into a socket on a string of Christmas lights, is lit up.

I was enchanted and had to have that ornament.

Soon I discovered that my Chris Mouse was only the first in the series. I eagerly looked forward to the next year’s entry. When it arrived in the stores the next fall I wandered in one day to take a look. Like the previous year, it was cute and this time featured Mr. Mouse asleep in a pinecone house, a tiny night light adding to the magic. I didn’t like it quite as well as the first one so I decided I might wait until after Christmas to buy it, maybe even find it on sale.

Sometimes, however, things work against you and such was the case in 1986. Just before Christmas I came down with a bad cold and was laid up for several days including on Christmas. The mouse was forgotten until, a few days after the holiday, I ventured out to the stores to do some bargain hunting. Alas, the second in the series was nowhere to be found.

In the following years, my lesson learned, I always purchased the ornaments I wanted well before Christmas. The Chris Mouse series? Ended up being 13 ornaments in all, each starring the adorable mouse in the blue nightshirt and red cap, each time doing something which featured a lovely little lighted object. It just so happened that I only had 12 of them and, every Christmas, I lamented not having the missing ornament.

That was until a few years ago when there, under the tree for me one Christmas, was an unexpected surprise. Santa’s helper – who I call hubby – had located the missing Chris Mouse and bought it for me. The prodigal rodent joined his brother’s on the tree, the series now complete.

It takes several large Rubbermaid totes to house all the Hallmark ornaments in their original boxes. One bin is full of the lighted and motion ornaments, the other primarily a collection of whimsical critters. A third tote holds glass balls but only a dozen or so are part of the Hallmark collection.

By the late 1990’s with more than enough decorations to fill at least two trees, I stopped buying ornaments.

2020, however, seems like the perfect excuse to purchase a new bauble with which to commemorate this unusual year. An online search revealed that my local dealer is just down the hill. Time for a shopping adventure… 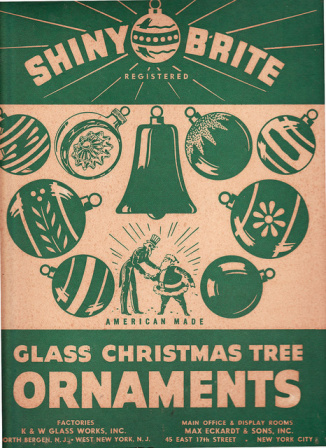 Long before Hallmark introduced their line of annual Christmas ornaments, another American Company  had taken the market by storm, selling millions of baubles every year from 1940 to 1962. Marketed as Shiny Brite, the distinctive green boxes which featured Santa Claus shaking Uncle Sam’s hand were a fixture in the average home of the 1950’s and 60’s.

The story begins in 1937 with importer Max Eckhardt who, seeing the clouds of war encroaching and feared that his supply line would be cut, went to the Corning Glass company in Pennsylvania and made a deal with them to begin producing ornments. Thus was born Shiny Brite. From the Infallible Wikipedia:
“Eckardt had been importing hand-blown glass balls from Germany since around 1907, but had the foresight to anticipate a disruption in his supply from the upcoming war. Corning adapted their process for making light bulbs to making clear glass ornaments, which were then shipped to Eckardt’s factories to be decorated by hand. The fact that Shiny Brite ornaments were an American-made product was stressed as a selling point during World War II.
Dating of the ornaments is often facilitated by studying the hook. The first Shiny Brite ornaments had the traditional metal cap and loop, with the hook attached to the loop, from which the ornament was hung from the tree.
Wartime production necessitated the replacement of the metal cap with a cardboard tab, from which the owner would use yarn or string to hang the ornament. These hangers firmly place the date of manufacture of the ornament to the early 1940s. (snip)
Shiny Brite ornaments were first manufactured at Corning’s plant in Wellsboro, Pennsylvania, and continued there for many decades. During its peak, Shiny Brite also had factories in New Jersey, located in the cities of Hoboken, Irvington, North Bergen, and West New York. The company’s main office and showroom were located at 45 East 17th Street in New York city.
Shiny Brite’s most popular ornaments have been reissued under the same trademark by Christopher Radko since 2001.”
Although there were other companies which manufactured and sold ornaments in that era, Shiny Brite was by far the largest player.

My collection of vintage ornaments

As a child in the 1960’s I loved the December day when our family’s tree would be put up. I always watched as my father strung the C-7 bulbs on the branches. It seemed as though it took forever for my mother to declare the moment when the ornaments could be hung. Out would come the green shiny brite boxes, their lids lifted, and one by one the delicate glass balls would soon dangle from the branches.

Each year it was as if seeing old friends arrive for the holidays. By the 1980’s – with their children all moved away – my parents quit hanging ornaments on a tree. Instead, they kept an artificial tree – lights already placed on the branches – in their basement storage room. Mid-December my dad would carry it upstairs, plug in the lights, and call it good.
The ornaments were squirreled away in a box in the storage room where they remained untouched for 30 years.
This past summer, as we worked to clean out my parent’s home after my Dad had moved to an Adult Family home, my sister and I kept waiting for the Christmas Box to be unearthed.
Finally, in late August, that day arrived. We sat on the floor and opened the ornament boxes, each picking out those we wanted to keep. Last week, after my tree was up, I went searching for my parents’ ornaments. I looked in box after box which had been stored in my garage since summer, but no ornaments.
Following a two day search, I lamented to my son that I could not find them. He, however, said he had seen them and a few minutes later produced a small box from a section of the garage where I had not looked.
Just like when I was a little girl, I opened the box and said hello to my old friends. But unlike during my childhood, I could not bear to hang them on my tree, fearful they might fall and break. Amazing how something so ordinary and familiar had now become precious and irreplacable. Instead, I placed the treasured ornaments in a bowl and, along with a pair of ceramic angels and two ceramic bells, set them in a place of honor.

I can only hope that one day my own children will also cherish these heirlooms passed down from generation to generation.
The links:
https://en.wikipedia.org/wiki/Shiny_Brite
I loved this story about Wellsboro, PA, where Shiny Brite’s were manufactured:
https://pawilds.com/wellsboro-the-town-that-saved-christmas/
And a nice story about Shiny Brite:
https://www.retrochristmascardcompany.com/the-history-of-shiny-brite-ornaments/
Join 120 other subscribers