A Different Kind Of Fever

In the spring of 1979 a different sort of fever gripped the United States. This fever, however, was one that encouraged people to get together in large groups. We called it Disco Fever. By the spring of that year, the musical airwaves were dominated by the catchy beat of Disco tunes and artists such as the Bee Gees, ABBA, and Donna Summer.

There was one song from that year – unlike any others – which has spanned generations and remains popular 40 years later. That song is I Will Survive.

On April 7, 1979, Gloria Gaynor’s anthem topped the Billboard Charts. The song’s path to popularity was one of being almost an afterthought… and yet the song survived and thrived. From the Infallible Wikipedia:

“Originally released as the B-side to a cover version of the Righteous Brothers song ‘Substitute’, ‘I Will Survive’ became a worldwide hit for Gaynor when disc jockeys played that side of the record instead (kick-started by legendary Studio 54 DJ Richie Kaczor). ‘Substitute’ appeared on the Billboard ‘Bubbling Under the Hot 100’ chart for four weeks in October–November 1978, peaking at No. 107. ‘I Will Survive’ then entered the Billboard Hot 100 in December that year and reached No. 1 on the chart in March 1979.” 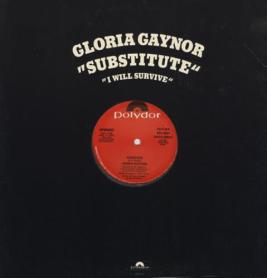 Even its three weeks at number one on the charts was unconventional. In March it arrived there for two weeks – March 10th and 17th – only to be knocked out by the Bee Gee’s song Tragedy. Yet, I Will Survive was back at number one two weeks later.

In writing this article I had to go out and find a YouTube of the Bee Gee’s Tragedy to remember it. Such has never been the case for Gloria Gaynor’s famous work. In list after list of ‘best’ songs, I Will Survive can be found. The Infallible Wikipedia provides additional information:

Go to any dance today and you are more likely than not to hear this song. Teens respond to its catchy beat and Gaynor’s soulful vocals with the same enthusiasm the young people of 1979 did.

The song has also become an anthem for anyone – particularly women – devastated by a relationship breakup. And perhaps that is one of the reasons for the song’s success. Its message resonates for souls whose heart has been broken only to discover their inner strength and be able to move on.

As a romance writer, breakups and finding one’s inner strength is elemental to many a story line. In fact, it is a theme which never gets old and connects with readers because nearly all have experienced it. I Will Survive taps in to that emotion, that moment in time, when the epiphany occurs. It’s storytelling at its best. That, I believe, is the essence of its staying power. The lyrics speak a universal truth which transcends time. My favorite lyrics of the song:

It took all the strength I had not to fall apart
Kept trying hard to mend the pieces of my broken heart
And I spent, oh, so many nights just feeling sorry for myself
I used to cry but now I hold my head up high

And you see me, somebody new
I’m not that chained up little girl still in love with you
And so you felt like dropping in and just expect me to be free
But now I’m saving all my loving for someone who’s loving me

Stay Healthy everyone. We will SURVIVE!

I feel strongly that the co-writer’s of the song need to be acknowledged:

And, of course, a link for the song itself: