In search of the perfect soup

By the end of February, most people are longing for spring to arrive. Alas, the warmer days still elude in the northern hemisphere. So what better way to celebrate on February 25th than with a steaming bowl of Clam Chowder. Today is National Clam Chowder day. 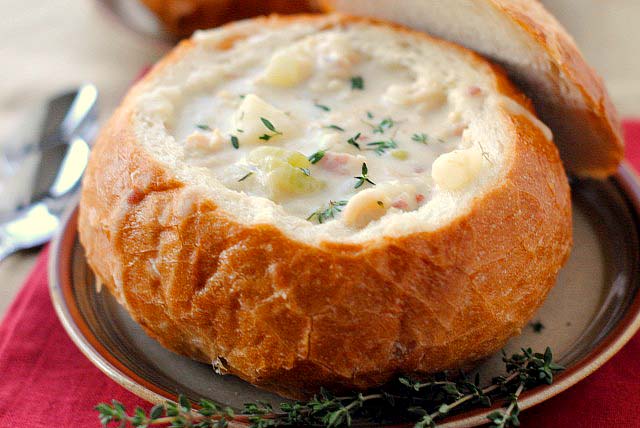 In thinking about this particular soup I cannot recall a time when I did not know of it or eat it. Always a staple in my household growing up, my mother used to make it from the frozen razor clams my family dug each summer.

Which got me to wondering, what WAS the history of clam chowder?

As always, the Infallible Wikipedia sheds some light for us:

“Clam chowder is any of several chowder soups containing clams and broth. In addition to clams, common ingredients include diced potatoes, onions, and celery. Other vegetables are not typically used, but small carrot strips or a garnish of parsley might occasionally be added primarily for color. A garnish of bay leaves adds both color and flavor. It is believed that clams were used in chowder because of the relative ease of harvesting them. Clam chowder is usually served with saltine crackers or small, hexagonal oyster crackers.

The dish originated in the Eastern United States, but is now commonly served in restaurants throughout the country, particularly on Fridays when American Catholics traditionally abstained from meat. Many regional variations exist, but the two most prevalent are New England or ‘white’ clam chowder and Rhode Island / Manhattan or ‘red’ clam chowder. (snip)

The earliest-established and most popular variety of clam chowder, New England clam chowder, was introduced to the region by French, Nova Scotian, or British settlers, becoming common in the 18th century. The first recipe for another variety, Manhattan clam chowder, known for using tomatoes and its consequently distinctly red coloring, was published before 1919, but it did not take on the current name until 1934. In 1939, the New England state of Maine debated legislation that would outlaw the use of tomatoes in chowder, thereby essentially prohibiting the ‘Manhattan’ form.”

I chuckled to myself when I read that last sentence about Maine considering a way to keep Manhattan chowder out of New England. Having grown up on New England style clam chowder, the red kind does seem a bit blasphemous.

My mother cooked wonderful clam chowder but me, not so much. I have, though, made it one of my fairly recent life’s missions to try clam chowder whenever I find myself in a coastal town which features the soup.

Fanizzi’s in Provincetown was, I think, the restaurant where we ate.

While on Cape Cod in 2008 with my hubby and then 15 year old daughter, we happened into a quaint restaurant in Provincetown and enjoyed steamy bowls  of the nectar on a cool, but clear, early April afternoon.

Provincetown, for those unfamiliar with Massachusetts geography, sits at the very furthest away (by land) part of Cape Cod. It was where the Pilgrims first landed in 1620. Although I can no longer recall the name of the restaurant where we had lunch, it was that trip which began the quest for perfect chowder.

One summer, while on an annual trip to Long Beach Washington with my sister, we went to several local eateries to try the clam chowder. I was surprised when the place where we had always gone turned out to not be my favorite.

Not as flashy as Fannizi’s – but their chowder is top rate.

It was on the fourth day – and fourth restaurant – I declared a winner. Castaway’s has been a fixture on Pacific Avenue for years. But I’d never been there. So my sister and I got a high table in the bar rather than wait for seating in the restaurant portion which seems to always be full up. I ordered the clam chowder in a bread bowl.

From the first bite I knew it was a winner. Even better was getting to consume every last drop which the soft interior of the bread bowl had absorbed. It was heavenly.

Now, whenever I am lucky enough to visit the beach, Castaway’s is a required stop for a bread bowl full of their clam chowder.

Writing this article has inspired me to look for recipes and try my hand at recreating the very best chowder I can. The following claims to be the BEST clam chowder ever. I think I will mosey out to the fresh fish market on Highway 20 (between Burlington and Anacortes) and buy some clams to make the chowder. I will update the blog later this week with the results!

The recipe includes butter, half and half, bay leaves, and Tabasco sauce. What’s not to like? Here is the link:

And a couple more links on the history and variations of the eponymous clam chowder: