For kids growing up in the 1950’s and 60’s reading comic books was a universal experience.  From Mickey Mouse to Marvel, there was a flavor for everyone.  While Marvel comics were not my thing, I did enjoy one comic book series immensely: Archie. 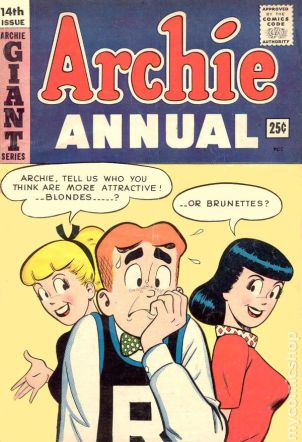 It was on February 11, 1942, when Archie and his pals got their very own series.  From the Infallible Wikipedia:

Archie first appeared in Pep Comics #22 in 1941 and soon became the most popular character for the comic. Due to his popularity, he was given his own series which debuted in winter 1942 titled Archie Comics. Starting with issue #114, the title was shortened to simply Archie. The series ended with issue #666 (June 2015) to make way for a new series set in Archie Comics’ ‘New Riverdale’.”

Unlike the Superhero comics of the day, Archie featured a popular red-headed teenager who seemed to attract trouble. Most of that trouble was centered on the rivalry between the wholesome Betty Cooper and the privileged Veronica Lodge. Archie – the object of both their affections – is the clueless pawn in their game of romantic chess.

With Archie’s friends: the hapless Jughead Jones, dumb jock Moose Mason, and manipulative Reggie Mantle, added to the mix, the opportunity for the comic’s writers to dream up creative teenager life story lines carried the series for decades.

An additional dozen plus characters also inhabit Riverdale – the fictional Midwest town where Archie lives – and have smaller recurring roles.

The comic book series was published for 73 consecutive years with its final issue in June 2015. It was relaunched that same year and is known as the “New Riverdale.” It sports an updated look with the characters taking on more realistic human features and also, according to the Infallible Wikipedia, “harken back to the comic’s roots by showcasing more edgy and humorous stories as well as present the origins for the character and his friends as well as how the famous love triangle between Archie, Betty, and Veronica began.”

What’s amazing is that the comic book remained as popular as it was for over seven decades. I first discovered it in the mid-1960’s in the stacks of comic books my two older brother’s owned. They had lots of the superhero variety but probably no more than a half dozen Archie’s. But I read every single one of the redheaded hero’s adventures multiple times.

Archie was, however, soon forgotten once I became a teenager myself and then an adult. At least until one day when I was at the store with my ten year old daughter. I happened to look up as we stood in the checkout line and there were the familiar drawings of my old friends Archie, Veronica, and Betty. On a whim I purchased the comic book for my daughter.

She was hooked, often spending some of her allowance money on the magazine. Archie comics were stuffed into her Christmas stocking and purchased for her when she was home sick. I may have even given her a subscription one year for her birthday.

I discovered a dozen of them during the purge process when we moved a couple years ago. Did she want them any longer? Now an adult, the answer was the same as it had been for me: no.

But Archie and gang had been good companions for a few short years. As for the issues we had, they were donated. I imagine some young girl and her parent finding some of those issues and enjoying the adventures of the accident prone, yet lovable, Archie, and it brings a smile to my face.

As always, a link or two: