Culturally, it was the height of the ‘me’ generation’s influence. Commonplace restrictions from previous decades had all but been abandoned, leaving the youth to do the one thing they wanted: have fun. 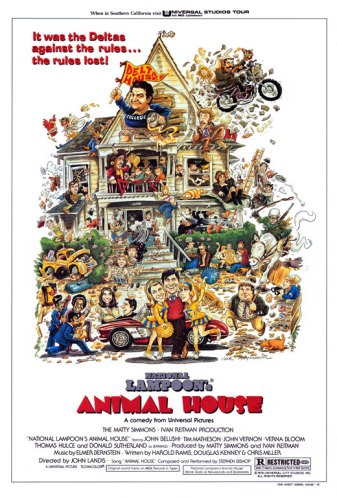 On July 28, 1978, a movie hit the theaters which encapsulated precisely this attitude, capturing the imagination of a generation. That movie: Animal House.

The idea for the movie came about via National Lampoon, a wildly popular magazine with college students. In fact, the official title of the movie is “National Lampoon’s Animal House.” The plot – to sum it up in a couple sentences is this: “Loser college guys join fraternity where anything goes. Fraternity gets kicked off campus and members, in an effort to save the fraternity, wreak havoc on campus and during the homecoming parade.”

With a budget of only 3 million allocated to its production, the executives at Universal Studios almost didn’t allow it to be made. But the writers were committed to the project, effectively wearing down the studio who basically told them ‘okay, but don’t expect much.’

The film was produced by Matty Simmons of National Lampoon and Ivan Reitman for Universal Pictures. It was inspired by stories written by Miller and published in National Lampoon. The stories were based on (Harold) Ramis’s experience in the Zeta Beta Tau fraternity at Washington University in St. Louis, Miller’s Alpha Delta Phi experiences at Dartmouth College in New Hampshire, and producer Reitman’s at McMaster University in Hamilton, Ontario.”

In many ways, the low budget contributed to the film’s success. No one had heard of any of the actors, John Belushi and Donald Sutherland excepted. Rather than turn the film into a showcase for the popular cast of Saturday Night Live as was suggested, it turned out that the ensemble of newcomers brought an element of collegiality to it that made the film unique.

One big hurdle was finding a college willing to allow the movie to be filmed on their campus. One after another turned it down since, after reading the script, determined the publicity would be detrimental to their institution. It was an act of bravery that one administrator finally agreed to it. Also from the Infallible Wikipedia:

“The president of the University of Oregon in Eugene, William Beaty Boyd, had been a senior administrator at the University of California in Berkeley in 1966 when his campus was considered for a location of the film The Graduate. After he consulted with other senior administrative colleagues who advised him to turn it down due to the lack of artistic merit, the college campus scenes set at Berkeley were shot at USC in Los Angeles. The film went on to become a classic, and Boyd was determined not to make the same mistake twice when the producers inquired about filming at Oregon. After consulting with student government leaders and officers of the Pan Hellenic Council, the Director of University Relations advised the president that the script, although raunchy and often tasteless, was a very funny spoof of college life. Boyd even allowed the filmmakers to use his office as Dean Wormer’s.” 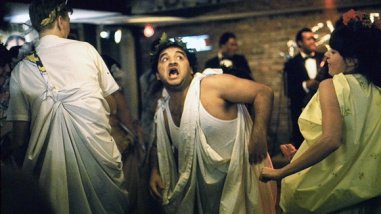 Now, I will say, if you’ve never seen the movie you should. As my now adult children know, there are some cultural references one absolutely needs to have. Animal House is such a film. The film is littered with quotable and iconic concepts many of which repeat to this day.

Ever hear of a toga party? You have Animal House to thank.

“Was It Over When The Germans Bombed Pearl Harbor? Hell No!” Animal House.

“Fat, Drunk, And Stupid Is No Way To Go Through Life, Son.” Animal House.

That summer, it went on to become the third highest grossing film of 1978 and – in the course of its run – took in a whopping 141.6 million. Not bad for a film which cost under $3 million to make and which the studio execs thought would flop.

When all was said and done, once again from the Infallible Wikipedia:

“In 2001, the United States Library of Congress deemed the film ‘culturally, historically, or aesthetically significant’ and selected it for preservation in the National Film Registry. Animal House is first on Bravo’s 100 Funniest Movies. In 2000, the American Film Institute ranked the film No. 36 on 100 Years… 100 Laughs, a list of the 100 best American comedies. In 2006, Miller wrote a more comprehensive memoir of his experiences in Dartmouth’s AD house in a book entitled, The Real Animal House: The Awesomely Depraved Saga of the Fraternity That Inspired the Movie, in which Miller recounts hijinks that were considered too risqué for the movie. In 2008, Empire magazine selected Animal House as one of The 500 Greatest Movies of All Time. The film was also selected by The New York Times as one of The 1000 Best Movies Ever Made.”

Back to 1978 and the phenomenon which had college students donning sheets and partying to the chants of “Toga! Toga! Toga!”

When I returned to the University of Puget Sound that September, everyone was talking about Animal House. Soon the Toga parties began and there were a handful of fraternity guy’s intent on channeling their inner Bluto. 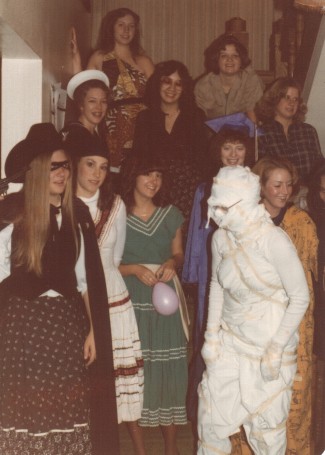 A few sorority sisters ready for a Halloween party 1978.

Unfortunately, or fortunately depending on your perspective, my sorority was located next door to the house which fashioned itself after the Delta’s of Animal House fame. There were shenanigans and crazy antics all that fall. Parties flowed out of their house and into the common areas, empty aluminum cans smashed against heads exactly like the John Belushi character did in the film, Christmas lights tossed into our basement level patio where they would ‘pop.’ And who knows what, exactly, was going on the night that a group of them appeared on the lawn outside our windows with that blow up doll.

Around 10 pm one night I heard a commotion outside of my room and the unmistakable thump, thump, thump of a large group of people making their way in unison down the hallway. What the heck?

A moment later: the sound of running feet. The door bursts open and one of my two roomies, Sheila, rushes in, slams the door behind her and presses her back to the closed door.

I can still picture her, a wild look in her eye, dressed in her full length flannel nightgown, hands pressed hard against the door, panting.

“There’s naked Phi Delts in our hall,” she gasped.

Now, to be clear, my other roommate Cathy and I DID NOT reopen that door to confirm her report. In fact, we wanted nothing to do with the conga line of nude men mooning the members of our sorority.

A minute or two later, the group reached the end of the hall and exited the building. Their bare hineys were last seen disappearing back into what I would consider UPS’ nominee for ‘Delta’ house.

In retrospect, my two years there were a rather surreal experience, greatly amplified by the culture of the time embodied in no small part by the movie Animal House.

In the iconic words of Kent ‘Flounder’ Dorfman “Oh boy! Is this Great!” 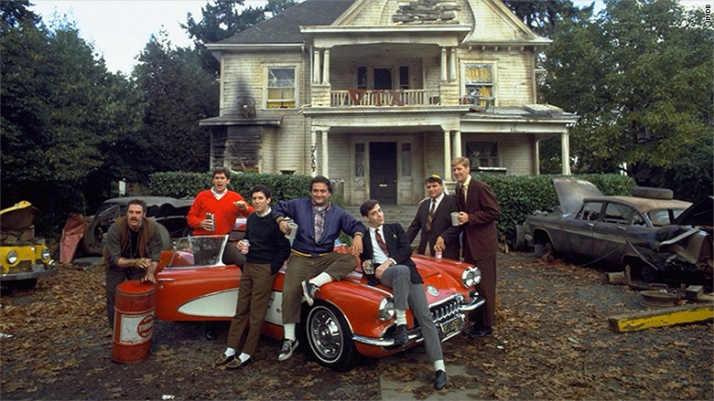 Who’s who in the Facebook Photo (left to right):

One thought on “Animal House”