Are We There Yet?

Memorial Day is, in the United States, the unofficial beginning of summer; it’s a time for picnics, camping, and outdoor activities. In many ways, however, it is the quintessential automobile road trip which has come to define the American spirit and quest for adventure and the start of summer. 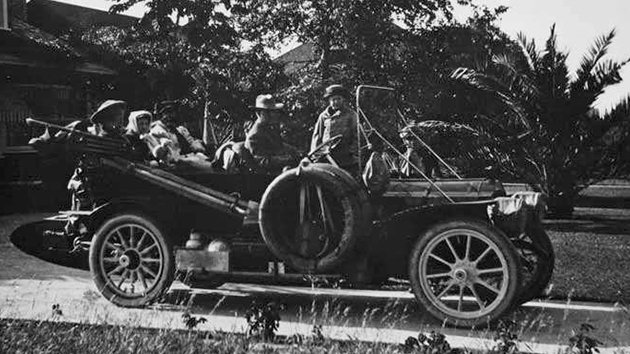 The Murdock family about to leave Pasadena

With the advent of cars in the early 1900’s, a few intrepid souls can be credited with establishing that it WAS possible to drive from coast to coast in an automobile. Although not the first to do so, Jacob Murdock, his wife Anna, children Lillian, Alice, and Jacob, Jr., were the first family to embark on such a trip. They, along with their mechanic, Phillip LeMay, departed Los Angeles on April 24, 1908 and arrived in New York City, 32 days, 5 hours, and 25 minutes later on May 26th.

Mr. Murdock – much to the joy of this writer who has a love of such history – recorded their travails on the trail in a short book which I found preserved by the University of Michigan. (see the link below). Alas, the Infallible Wikipedia has not heard of Mr. Murdock. Instead, I enjoyed a delightful read while sitting in a comfortable chair trying hard to imagine all the family and the mechanic – along with an occasional sixth passenger found along the way – experienced.

In 1908, paved roads were few, especially through the great American west. Their vehicle was a 1908 “Thirty” Packard with a canvas roof, folding windshield and speedometer. They started in Los Angeles, then followed the path of modern I-15 to Daggett. Those 141 miles were the first day of their journey.

As they continued northeast through the Mojave desert and along the southern boundary of Death Valley, they became mired in quicksand, and eventually hit upon the use of heavy rope to create makeshift chains for the tires. This experience helped prepare them for the next day when, as Murdock says in the book, “We soon found that our drift and sand experience at Coyote Lake had been merely a kindergarten for us in the art of tractionless travel.” It took 13 hours to drive 67 miles, many of those “where we again shoveled, groveled, plowed and floundered.”

From there it was northward into Nevada and Utah. They drove around the north end of the Great Salt Lake to Ogden, completing the first leg of their journey, nearly 1000 miles.

I found it interesting to ‘map’ their journey. Once they arrived in Wyoming their path was generally along modern day I-80 clear to Iowa before tracking north a bit for a straight line in to Chicago; from there they dropped down into Pennsylvania for a brief stop at their home in Johnstown before completing the journey. On May 26th, they ended their 3,693.8 mile family trip when they arrived on the corner of Broadway and Sixty-first street in New York City.

The Murdock family on May 26, 1908 upon their arrival in New York City

Along the way they had encountered oppressive heat, a blizzard, and much rain. The tracts they drove on went from sandy, to muddy, to rocky, to impassible in places. They experienced flat tires, mechanical breakdowns, and the car becoming mired in sand and mud. They got lost. While Murdock highlighted these challenges, rarely does he address what riding in that car for eight to fifteen  hours a day was like for the passengers.

Which got me thinking about my first multi-day roadtrip. It was the summer of 1970 and my parents, my slightly older sister, and I drove from Yakima to California in a 1964 Cadillac Coupe DeVille. My dad had a strong need to connect with his family, having just lost his mother in January. So off we drove to Elk Grove, California, staying in motels along the way and eating most of our meals at Denny’s.

In retrospect, I doubt my parents WANTED to eat every meal at Denny’s. But they had a picky eater along who ordered a French dip sandwich for pretty much every meal. It’s actually surprising that I still like French Dips. I don’t recall much of the scenery along the way. What I do recall is we stayed at my Aunt Arlene and Uncle Dick’s place outside Sacramento and my sister and I got to hang out with my very cool, two years older cousin, Sally. For a couple of days we got to swim in the pool at the apartment complex they managed and do awesome teenage girl stuff like sunbathe and talk about boys. 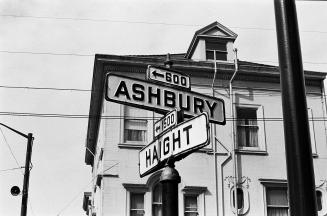 Our trip next took us to San Francisco where, unfortunately for me, we could not locate a Denny’s. Lunch that day took us to a drive in burger joint in the heart of San Fran (after a ride on the cable cars and navigating Lombard street). As we sat in the car eating our food, either my sister or I noticed the street signs at the intersection: Haight and Ashbury. In 1970 this WAS ground zero for the counter culture movement of the day. It was there I saw my first real hippie.

Further south we continued, arriving in Anaheim where we stayed at the Jolly Roger Inn. The next day we spent at Disneyland. Yes, just one day… enough time in my parents’ book. I know we stood in line a really long time to ride both “Pirates of the Caribbean” (it was the newest attraction then, having opened 3 years earlier) and “The Haunted Mansion.” We also rode on the “Mine Train through Nature’s Wonderland” which was a pedestrian trip on a tiny railroad engine through scenes from the American West. It was replaced less than a decade later with one of my favorite roller coasters, “Big Thunder Railroad.”

A place for fun and a place to eat!

Along the way, my sister and I were introduced to a bunch of second cousins and our great aunt and after a couple of days, we headed back north, winding our way up the Pacific coast all the way through California and Oregon.

As a young teen, I had zero appreciation for how special that first road trip was. I wish I had been able to drink in all the sights, sounds, and experiences of that time. Alas, as my mother – who was fond of homilies used to opine – ‘youth is wasted on the young.’

There have been many more ‘road trips’ over the years as the hubby and I have made it a mission to travel the vast lands of the United States by car. In other blog posts I have shared some of those adventures (here, here, here, and here) . But it is Jacob Murdock who captures the spirit of the American road trip in this one paragraph:

“If there ever is a national highway from ocean to ocean, the tourist will find many wide perspectives and long, beautifully-colored vistas which are well worth his while. Some of the scenes which we enjoyed were so beautiful that we thought them worth the trouble and hardship to which we had been subject in getting there over districts without any roads at all.”