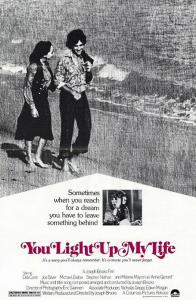 On November 19, 1977, this song was in the middle of a 10 week run as the number one song in America. You Light Up My Life was the one and only Top 40 hit from Debbie Boone, daughter of 50’s teen idol Pat Boone. It reached number one on October 15 and stayed in that position through December 23, making it – at the time – the only recording to stay that long in the top spot in Billboard history.

“Besting her chart performance in Billboard, Boone’s ‘You Light Up My Life’ single topped Record World’s Top 100 Singles Chart for an unbroken record of 13 weeks. On Billboard’s chart, Boone was unseated from #1 by the Bee Gees, with ‘How Deep Is Your Love,’ the first of three #1 singles from the ‘Saturday Night Fever’ soundtrack. On Record World’s chart, Boone kept the Bee Gees out of the number-one spot. In Cash Box Magazine, ‘You Light Up My Life’ managed only an eight-week stay at the top of the chart, before being dethroned by Crystal Gayle’s ‘Don’t It Make My Brown Eyes Blue’.

The single, which was certified Platinum by the Recording Industry Association of America (RIAA), also hit #1 on the Adult Contemporary chart and reached #4 on the Country chart. The single peaked at #48 I’m the UK Singles Chart. Boone’s hit single led to her winning the 1978 Grammy Award for Best New Artist, with additional Grammy nominations for Best Pop Vocal Performance, Female and Record of the Year. Boone also won the 1977 American Music Award for Favorite Pop Single.

Although it was written by (Joe) Brooks as a love song, the devout Boone interpreted it as inspirational and proclaimed that it was instead God who ‘lit up her life.’”

The song was tainted by controversy, however, as songwriter Brooks apparently did not want to pay the agreed upon amount owed Kasey Cisyk, the artist who sang it for the movie of the same name, and whose version is included on the 1977 soundtrack.

Boone was told, when recording the song for release as a single, exactly how to sing it and her vocals were dubbed onto the original orchestral track.

At the time, I recall that Boone received much derision and the song was labeled as saccharin. In reading what occurred, however, I feel bad for both the women caught up in the controversy. Perhaps Cisyk was denied her shot at a Top 40 career and, perhaps, Boone was lulled into a sense of inevitability that she would become a star like her father. Although in listening to both versions, I think Boone’s is better.

Boone released additional songs into the pop market, but none ever came close to the success of “You Light Up My Life.” Her career eventually led her back to country music – where she had started – and then to work in the Christian music world.

In the fall of 1977, you simply could not avoid the song. It was played hour after hour on the radio. That autumn was one of the most memorable in my life: I was living away from my parents for the first time, having joined the Alpha Phi sorority at the University of Puget Sound. While I was studying, I don’t think I was studying quite as much as I should have been. Instead, I was attending frat parties every weekend and going on dates! That era in my life was punctuated by music and there were a couple other songs which should have, in my opinion, been number one instead.

These included Billy Joel’s Just The Way You Are – an infinitely better song; Rita Coolidge’s version of We’re All Alone; Carly Simon’s Nobody Does It Better; and Don’t It Make My Brown Eyes Blue by Crystal Gayle. The list of great songs also includes big  hits – but never number ones – from Foreigner, Heart, Fleetwood Mac, Styx, Supertramp, and Steely Dan.

Yes, 1977 was an epic year for music and will, unfortunately, forever be associated with You Light Up My Life.

And in case you’d like to hear the Casey Cisyk version and really get the worm stuck in your head (it’s been in mine since I wrote this!) here’s that video also. Note that you are seeing Didi Conn on screen – she is doing a lip-sync to Cisyk’s vocals. Enjoy!