For young people in the 1960’s and 70’s, this device was as essential to teenagers as the smart phones of today.

The difference being that this device was tethered to a specific location and it allowed you to do but one thing: talk.

Nearly every household in middle America had one and, by the early 1960’s, all featured a rotary dial, the patent for which was applied for on August 20, 1896. The device was, of course, the telephone.

It was, however, the addition of the rotary dial which made it possible for the telephone to become a common household essential. As is often the case, controversy surrounded the granting of patents. The first rotary style was developed in 1891. According to the Infallible Wikipedia:

“Almon Brown Strowger was the first to file a patent for a rotary dial on December 21, 1891, which was awarded on November 29, 1892, as U.S. Patent 486,909. The early rotary dials used lugs on a finger plate instead of holes, and the pulse train was generated without the control of spring action or a governor on the forward movement of the wheel, which proved to be difficult to operate correctly.”

It was only a few short years later when three inventors in Kansas – brother’s Charles and Frank Erickson along with their friend Frank Lundquist – provided the refinement needed and the rotary dial with finger holes that we know was invented. Different enough from Strowger’s design, it became the standard. From the historical files of the Kansas Collection:

“The most dramatic contribution of the Ericksons in telephony is associated with the invention and development of the dial telephone. Application for the patent was made by (A.E.) Keith and the Ericksons on August 20, 1896, and Patent No. 597,062 was granted on January 11, 1898. The dial method was based upon a finger wheel dial instead of the push buttons, which were cumbersome and impractical. The dial method, with the switching and trunk systems, provided full access to the vast resources of a telephone exchange. R. B. Hill, an authority in telephony, has described this important development as follows: ‘Dialing a number wound up a spring whose tension, when the finger was withdrawn, caused the dial to return to its normal position. The return rotation was limited to a moderate speed by an escapement mechanism, and, during the return, the required number of circuit interruptions took place to control the movement of the central office apparatus.’”

Telephone numbers in the 1960’s were identified by a combination of letters and numbers. Eight of the finger holes on the phone had 3 letters. My phone number growing up, then, was listed as follows: Glencourt 2, 4100, or in its phone book listed form, GL2-4100. Translation for the kids of today: 452-4100. Area Codes were added in 1947 but unlike today were not needed for all calls.

Standard issue phone in the 1960’s

In my household the phone was strategically placed in the kitchen. When it rang, you answered as there was no answering machine. Up until about 1971 the phone was never for me and the conversations were usually brief as the device was a method for setting up an appointment or such other daily business.

With teenagers in the house, however, its use ballooned. My sister used it, especially, for the higher purpose of dialing in to radio stations to make song requests and try to win things. With transistor radio on one ear and the telephone on the other she’d dial incessantly to be the 10th or 20th or 93rd caller. She seemed to win. A lot.

My long suffering parents finally tired of chatty teenagers doing their teenager business in the middle of the family area and a second phone was installed.

This phone was the holy grail of all things teen. Located in my parents’ bedroom it provided the one thing we craved: privacy.

When boys started to call my older sister – and eventually me – we were allowed to use the phone in my parent’s bedroom. There was no chair next to the phone, just the bed and the floor. Many an hour was spent sitting on that floor, back against the bed, talking to the boy of the month… at least until Mom would come in to the room and tell us to wrap it up. 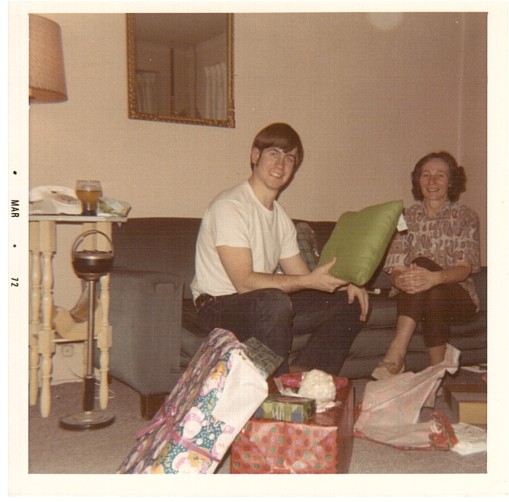 Unlike today, photos of people with phones was uncommon. In going through old photo albums this was the only picture I found with a phone in it. I took this photo at my older brother’s apartment (he was 24) when me and my parents drove to Seattle on December 27, 1971, to bring him Christmas. Mom is on the right. Rotary dial phone is on the left.

We envied the few friends who had their own phone in their room. What a luxury!

When I became a parent and cell phones (before the smart phones took over) were a thing it became very difficult to monitor what the child was doing. No doubt it’s even more difficult now with text messages, unfettered internet access, and app’s like Instagram. It was much easier for my parents as they could cut the conversation off at any time and when the household went to bed no teen was sneakily talking or texting on the phone.

I attribute my ability to pick up a phone and call anyone about anything to the training I received as a teenager. Back then the only way anything was going to happen was by grabbing the phone and twisting those 10 little holes to make a call. Ah, the good old days.

A couple of links for those who wish to learn more about phones and the rotary dial: