As someone born into a family with an uncommon last name, I notice whenever I see that name. A year ago in June I wrote about my ignorance of Washington State geology when I admitted I did not realize Glacier Peak was this state’s ‘fifth’ volcano. (You can read all about it at https://barbaradevore.com/2018/06/12/glacier-peak-washington/)

Fast forward to August 3… when I receive the following text from the hubby: 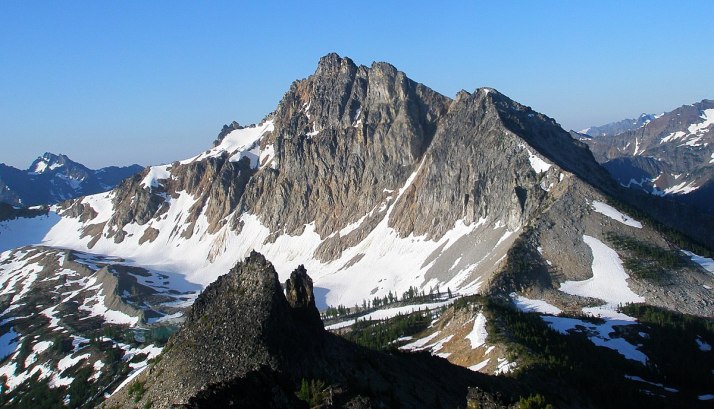 “Just saw on King 5 there is a Devore Creek fire near Stehiken. Comes down from Devore Peak.”

How is it I never knew of this Devore Peak or Creek? Yet, here it has been, hiding out 20 miles northeast of Glacier Peak, undoubtedly since the time the first settlers imparted their names on things.

“Devore Peak is an 8,360+ ft (2,550+ m) mountain summit located in the Glacier Peak Wilderness of the North Cascades in Washington State. The mountain is situated in Chelan County, on land managed by Wenatchee National Forest. Its nearest higher peak is Martin Peak, 3.36 mi (5.41 km) to the southwest, and Tupshin Peak lies 1.55 mi (2.49 km) to the north-northeast. Precipitation runoff from the peak drains to nearby Lake Chelan via tributaries of the Stehekin River.”

So it got me thinking… where else are things named Devore (or DeVore as my family spells it) that I do not know about?

Of course I know about DeVore, California although I’ve never been there. The town was a stop on historic Route 66. It has since been incorporated into sprawling, 81 square mile, San Bernardino. Much of the DeVore neighborhood was leveled by a wildfire in 2003, with 904 homes destroyed.

If you travel 1,723 miles to the east you will find a dot-on-the-road community in Indiana also named Devore. Originally named Mill Creek, some interloper relative of mine got a post office located there and probably named it after himself.

But back to Devore Peak. Despite my extensive internet research I cannot find any ancestor or relative after whom the mountain is named although I suppose it could be the Reverend John DeVore. He was the first minister to establish a church north of the Columbia River in Steilacoom. From the Washington State History link site:

“(Lafayette)Balch (Steilacoom’s founder) persuaded Reverend John F. DeVore (1817-1889) and his wife Jane Devore (d. 1860) to relocate to Steilacoom in 1853. DeVore built a two-story Methodist Episcopal church that also served as a school and meeting hall. When the church bell, ordered from the East, arrived with a balance due, residents took up a collection. Afterward the bell became town property, used to signal emergencies and public meetings along with the call to worship.”

Monument in Steilacoom, Washington commemorating the erection of the first Protestant Church by Reverend John DeVore

When a college student, I drove down there one day from nearby University of Puget Sound (which was founded as a Methodist college) and located the marker for Reverend DeVore. Alas, the Reverend is not a direct ancestor and I was never able to establish any relationship.

But it does make one wonder – unless you have a very common last name – how many others share yours?

According to the website HowManyOfMe.com, (http://howmanyofme.com/) in the 2010 census there were 13,501 people in the United States with the last name of DeVore. When you consider that there are some 329 million in the country that’s only .004 percent of all people with the same last name. If I extrapolate that even further and add my first name there were 65 other people named Barbara DeVore in the U.S. that year.

As I was growing up I knew of only one other person with the last name DeVore who was not related to our family. That would be the butcher who worked at the Safeway on 36th and Tieton Drive in Yakima. I was always so very amused when I would go to the store with my mother. If the shopping trip involved a visit to the meat counter inevitably the exchange would go something like this:

And then they both would laugh.

Yes, Mr. Devoir the butcher spelled it different. But the two of them obviously enjoyed the inside joke of having the ‘same’ last name.

As I was writing this article I could not think of a single person I’ve met casually with the last name DeVore. Through my genealogy research and DNA matching, I’ve found quite a number of cousins and have enjoyed getting to know many of them on Facebook.

Occasionally I will have someone ask do you know ‘fill-in-the-blank’ DeVore? Often I am able to say he/she is my second cousin, once removed. But mostly it doesn’t come up.

I rather like the unique name and the mystery of it all. According to a book about the DeVore families compiled by Betty DeVore Mann in 1992, the history of the name is this: 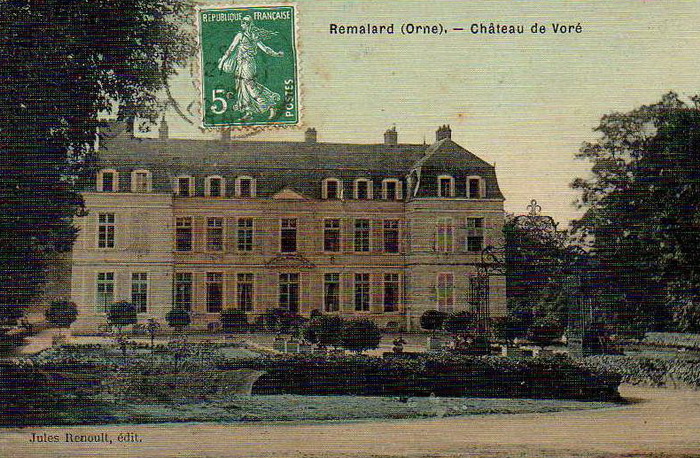 “There is a small, stately chateau in Normandy, near Alencon and 3 kilometers from Remalard, named Chateau de Vore. The de Vore family left in the 17th century. Several American Devores have interviewed the 2 remaining de Vores in Paris. They knew very little about their ancestry, because their grandfather was the illegitimate son of a wealthy family and he was sent away when he was very young. He carried his mother’s maiden-name. And so the story goes…”

She also adds “the Huguenot Society tells us that Devore is of Huguenot origin. The Huguenots were the French Protestants who were persecuted and made a mass exodus from France between 1550 and 1780.”

When I got my DNA information back recently it confirmed that I was 3 percent French*. While the family history will likely remain hidden in the mists of time, the pursuit of it has dogged me since I became old enough to ask “Who am I? And what am I doing here?”

Who knows, maybe there’s an historical novel in there, the intrigue of an illegitimate child who grows to a man. It is the story of a man who must disavow his country for his religion, never able to claim his true heritage, who must establish a new life in a distant land.

Perhaps not my family’s story… after all I know that my great-great grandfather Hartley DeVore was a shoemaker in Wisconsin in 1850. Not nearly as romantic!

*In my most recently updated DNA profile, the French connection has disappeared. I covered THAT topic here: https://barbaradevore.com/2022/07/26/ancestor-hunting-dna/

One thought on “Peak DeVore”