The Curse of Automation 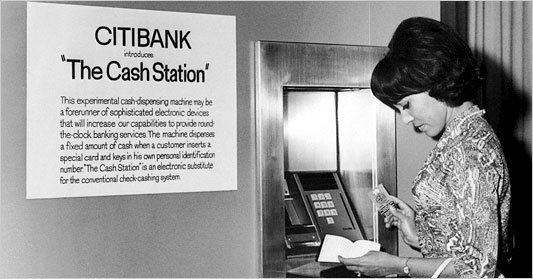 On June 4, 1973, the US patent for the ATM machine was issued to Don Wetzel, Tom Barnes, and George Chastain.

As with many such inventions, it did not spring spontaneously into use as there were others who had conceived of the idea for at least three decades prior. Cash machines were used in both Japan and Great Britain for nearly a decade before they arrived in the United States.

For the purposes of this article, however, we will go with 1973 as the year this form of automation entered our American lives. From the Infallible Wikipedia:

“After looking firsthand at the experiences in Europe, in 1968 the ATM was pioneered in the U.S. by Donald Wetzel, who was a department head at a company called Docutel. Docutel was a subsidiary of Recognition Equipment Inc of Dallas, Texas, which was producing optical scanning equipment and had instructed Docutel to explore automated baggage handling and automated gasoline pumps.

On September 2, 1969, Chemical Bank installed the first ATM in the U.S. at its branch in Rockville Centre, New York. The first ATMs were designed to dispense a fixed amount of cash when a user inserted a specially coded card. A Chemical Bank advertisement boasted ‘On Sept. 2 our bank will open at 9:00 and never close again.’ Chemical’s ATM, initially known as a Docuteller was designed by Donald Wetzel and his company Docutel. Chemical executives were initially hesitant about the electronic banking transition given the high cost of the early machines. Additionally, executives were concerned that customers would resist having machines handling their money. In 1995, the Smithsonian National Museum of American History recognised Docutel and Wetzel as the inventors of the networked ATM.

By 1974, Docutel had acquired 70 percent of the U.S. market; but as a result of the early 1970s worldwide recession and its reliance on a single product line, Docutel lost its independence and was forced to merge with the U.S. subsidiary of Olivetti.

Wetzel was recognised by the United States Patent Office as having invented the ATM in the form of U.S. Patent # 3,761,682; the application had been filed in October 1971 and the patent was granted in 1973. However, the U.S. patent record cites at least three previous applications from Docutel, all relevant to the development of the ATM and where Wetzel does not figure, namely US Patent # 3,662,343, U.S. Patent # 3651976 and U.S. Patent # 3,68,569. These patents are all credited to Kenneth S. Goldstein, MR Karecki, TR Barnes, GR Chastian and John D. White.”

Automation, of course, is not limited to the dispensing of money. It’s everywhere in our world. And nowhere is it more frustrating and confusing than in public restrooms.

When one enters such a place it becomes a midway house of horrors as one never knows what is or is not automated. Like the toilet. 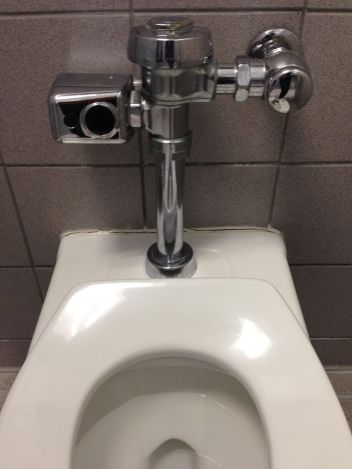 Upon entry into the stall I dread seeing the little black box with the red light attached to the back of the throne. I don’t know if it’s just me but it seems as if the slightest movement will trigger the flushing mechanism and the toilet turns into an unruly bidet, spraying the unsuspecting (me!) customer with a premature shower of love. Sometimes this occurs multiple times sending this user screaming from the stall.

Now I also don’t know about others but I always (ALWAYS!) wash my hands before I leave the restroom. Having survived the automatic flushing toilet, the next gauntlet is the sink. I am never sure if swiping my hands under the faucet will trigger a flow of water or if I must push on the neck of the faucet or, heaven forbid, use an old-fashioned handle. An automatic faucet is a mystery. What is the exact placement of one’s hands to produce the elusive water? Too high or too low and you get nothing, instead looking like a magician swiping your digits back and forth in an attempt to conjure up the desired fluid.

Need soap? The device on the nearby wall never gives any clue as to how its operated. I stare at it and try to guess. My first attempt is yet another magical wave of my hand. If that does not work then I start pressing on what looks like levers and buttons. The mound of clear gel on the counter below the machine provides evidence that I am not the first to guess incorrectly how to use it.

Now, with soap in hand and an idea of how to get water to flow, I wash my hands then turn to the scariest step of all: drying. 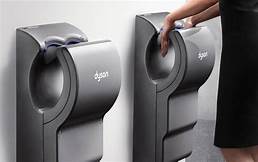 In some restrooms you have a choice between paper towels and, nowadays, the device where you put your hands down into what looks like modern day stocks. The machine springs to life and blasts out a stream of air produced from the engines of a Boeing 747. In my hands go. I watch in fascinated horror as the skin on them wrinkles and flaps like the upper arms on Miss Luhman, the infamous fourth grade teacher who, when she was conducting the school choir, held all children’s attention with fascinated attention on her flappy arms.

Or, heaven forbid, it’s an automatic towel dispenser. Usually there are two such devices, side by side, in the restroom which provides the opportunity to do the paper towel dispenser dance (TM). I stand a foot away from the silver boxes, extend my arms straight out and then move my hands simultaneously in a frenetic motion as though doing that 1960’s dance The Swim.

At last – if I’m lucky – two inches of blessed brown paper appears. I tear it off, dry three fingers, then start the dance once again. After three or four rounds of wild gyrations, my hands are dry, I’ve gotten the day’s workout, and I escape still slightly wet but mostly unscathed.

Actual footage of me attempting to get a paper towel from an automatic dispenser.