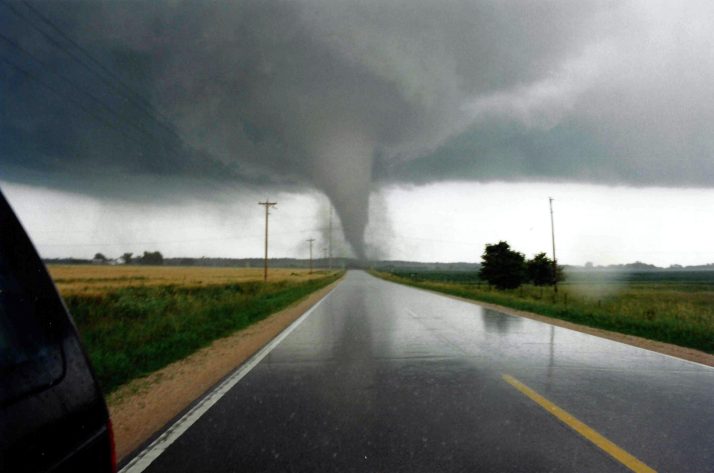 Mid-May in the United States is often a dangerous time to be in the central plains. The month is prime tornado season, a month when hundreds of twisters can occur in what is described as an ‘outbreak.’

While tornado’s have been observed during every month of the year, my research revealed that the third week of May (the 20th to the 27th) has produced a phenomenal number since 1955. In fact, there have been 1,448 recorded U.S. tornadoes in this date range!

One of the deadliest and most damaging tornado sequences began on May 21, 2011 and continued for six days. From the Infallible Wikipedia:

“On May 21, a small system of thunderstorms developed in Brown County, Kansas while another system formed to the southeast of Emporia, Kansas. The Brown county system spawned a brief tornado over Topeka, Kansas, causing minor damage. This system also caused significant damage in Oskaloosa, Kansas, and other communities. Meanwhile, the Emporia system spawned an EF3 tornado that struck Reading, Kansas; one person was killed, several others were injured, and at least 20 houses were destroyed. These two systems developed several other tornadoes throughout the evening.

A moderate risk of severe weather was issued for much of the Midwest, as well as further south to Oklahoma for May 22. (snip). Late that afternoon, a large, intense EF5 multiple-vortex tornado left catastrophic destruction in Joplin, Missouri. Causing 158 fatalities, it was the deadliest single tornado in the U.S. since at least 1947.”

The next day, May 23, tornadic activity continued but was minor compared to Joplin. The sequence was capped by an EF5 tornado in El Reno, Oklahoma on May 24. Also from the Infallible Wikipedia:

“ At 12:50 p.m. CDT, the SPC issued a Particularly Dangerous Situation  (PDS) tornado watch for parts of central Oklahoma, including Oklahoma City and northern Texas, in effect until 10:00 p.m. CDT. Numerous tornadoes touched down in several regions, with the first activity being in western Oklahoma that afternoon where several very intense tornadoes developed, including another EF5 (the sixth of the year). They did not cause extensive damage in Oklahoma City, but 11 deaths were reported among extensive damage just to the southwest of the OKC metro. Other tornado clusters developed in central Kansas that afternoon and in the Dallas-Fort Worth Metroplex that evening.”

As I have watched the tornado activity these past few days it prompts a memory of when drove with my son from Seattle to Nashville in May 2014.

The morning of May 11, Mother’s Day, we arose before daylight. We had spent the night in Mitchell, South Dakota. The previous day I followed the severe weather reports on my brand new smart phone. It looked like the central US from northern Iowa through Oklahoma, Kansas and Missouri, would be impacted. That morning we had a choice to make:

Head south and risk being in the path of tornadoes or continue along I-90 and hope to skirt the storms by going far to the east before taking I-65 south to Nashville.

We were up before dawn, racing across Minnesota. By early afternoon we crossed the Mississippi River into Wisconsin. It was when I-90 turned south at Tomah that things started to change.

The sky clouded and the winds picked up. We stopped only for gas breaks, choosing to eat nuts, fruit, and veggie straws in the car.

As a bonafide National Weather Service junkie, I can tell you there are two colors which strike fear when they appear on the weather map: bright yellow and red. The first means ‘tornado watch.’ The second is ‘tornado’ warning – as in ‘a tornado is on the ground’. I watched as county after county in Iowa turned yellow, the storm marching toward Illinois and us.

We zigzagged to the southwest, me counting out dollar bills and change to get us through each toll booth. When I could look up from the map my eyes were drawn to the threatening western sky. And the Illinois counties turned yellow. Finally, a mere 30 miles away, we could see a black cloud headed directly for Joliet. Could we outrun it? A couple minutes later we turned east and entered Indiana unscathed.

We hurried south, making a pit stop at a rest area/park near Rensselaer. I was amazed – and said so – that there were people having a picnic there when the weather map indicated that the spot was right in the path of the severe weather.

By this time the hubby – back home in Kirkland – was tracking the storms and giving advice. Of course my son and I were driving somewhat blind as to the real-time nature of the event and appreciated the text messages alerting us to the dangers.

We were just outside of Indianapolis when the hubby advised that there was tornado activity passing through that city. The conditions deteriorated and driving became more treacherous. Not sure what to do, my son turned the truck around and we headed north once again. But, we were now informed by the hubby, the system to the north was also a problem, so not to go north. We stopped at a Love’s Travel stop 7 miles south of Lebanon. Perched on a slight rise with a full western view we watched the dark clouds form to our southwest and speculated where the storm would head. We couldn’t continue south and couldn’t go north. We watched for several minutes before I, with growing alarm at the spectacle, said to my son, “We can’t stay here.”

Back on the road a minute later he headed south…

“I’m going to thread the needle.”

And so we did. The rain poured but we were now on the backside of the front. By the time we exited Indianapolis, the weather cleared. A short time later and well after 8 p.m. and dark, we stopped at a rest area. When we got back to the truck my son asked me if I could drive. He’d done most of the day’s driving, nearly 14 hours behind the wheel… but we were both spent and knew it would be folly to continue to Nashville that night.

That hotel in Columbia, Indiana – a lovely little town – was the best thing we’d seen that day. Not the most interesting, mind you, but definitely the best.

Update May 2022 – I’m including a video posted by storm chaser, Skip Talbot, from May 11, 2014. While it’s likely we would have been south and east of the tornadoes, one can never really know…

One thought on ““I’m Going To Thread The Needle””