This artist likely could have been a ‘one hit wonder’ – after all who could possibly make it big in American pop culture with their chosen instrument being the accordion?

With his strange sense of humor and incredible work ethic, he has instead become a mainstay in the world of novelty songs for more than 30 years. The artist: Al Yankovic or, professionally, Weird Al.

An only child who grew up in Lynwood, California, Al celebrates his 59th birthday on October 23.

He credits his father, Nick, for constantly reminding him of the philosophy that “the key to success” was “doing for a living whatever makes you happy.”

It was also his parents who bought him an accordion for his sixth birthday – rather than a guitar – setting the young Al on the road to nerdiness.

It all began in 1976 thanks to the radio DJ known as Dr. Demento. According to the Infallible Wikipedia:

“Yankovic received his first exposure via Southern California and syndicated comedy radio personality Dr. Demento’s radio show, saying ‘If there hadn’t been a Dr. Demento, I’d probably have a real job now.’ In 1976, Dr. Demento spoke at Yankovic’s school where the then-16-year-old Yankovic gave him a homemade tape of original and parody songs performed on the accordion in Yankovic’s bedroom into a ‘cheesy little tape recorder’. The tape’s first song, ‘Belvedere Cruisin’’ – about his family’s Plymouth Belvedere – was played on Demento’s comedy radio show, launching Yankovic’s career. Demento said, ‘’Belvedere Cruising’ might not have been the very best song I ever heard, but it had some clever lines […] I put the tape on the air immediately.’ Yankovic also played at local coffeehouses, accompanied by fellow dorm resident Joel Miller on bongos. Yankovic said:

‘It was sort of like amateur music night, and a lot of people were like wannabe Dan Fogelberg’s. They’d get up on stage with their acoustic guitar and do these lovely ballads. And I would get up with my accordion and play the theme from 2001. And people were kind of shocked that I would be disrupting their mellow Thursday night folk fest.’

During Yankovic’s sophomore year as an architecture student at Cal Poly, he became a disc jockey at KCPR, the university’s radio station. Yankovic said he had originally been nicknamed ‘Weird Al’ by fellow students and ‘took it on professionally’ as his persona for the station. In 1978, he released his first recording (as Alfred Yankovic), ‘Take Me Down’, on the LP, Slo Grown, as a benefit for the Economic Opportunity Commission of San Luis Obispo County. The song mocked famous nearby landmarks such as Bubblegum Alley and the fountain toilets at the Madonna Inn.” 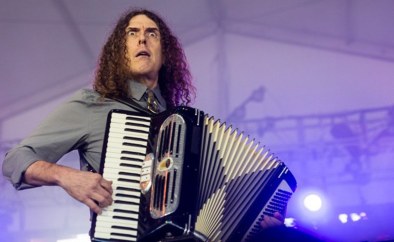 With the release of his 2014 album, Mandatory Fun, his published song list stood at 194. A truly huge number which speaks to his endurance as an artist. In fact, Weird Al’s career has outlasted most of the musicians whose song’s he’s parodied.

One fact about Weird Al is that he always gets permission from the original artist’s to include their songs in his work. The most notable artist to refuse was Prince. Another whose songs were refused – not by the artist but by the recording label – was Lady Gaga. Weird Al ended up doing two Lady Gaga parodies which were never included on an album but released for free on the internet. Also from the Infallible Wikipedia:

“Yankovic had reported an interest in parodying Lady Gaga’s material, and on April 20 (2011) announced that he had written and recorded a parody of ‘Born This Way’ titled ‘Perform This Way’ , to be the lead single for his new album. However, upon first submitting it to Lady Gaga’s manager for approval (which Yankovic does as a courtesy), he was not given permission to release it commercially. As he had previously done under similar circumstances (with his parody of James Blunt’s ‘You’re Beautiful’ , which was titled ‘You’re Pitiful’), Yankovic then released the song for free on the internet. Soon afterwards, Gaga’s manager admitted that he had denied the parody of his own accord without forwarding the song to his client, and upon seeing it online, Lady Gaga granted permission for the parody. Yankovic has stated that all of his proceeds from the parody and its music video will be donated to the Human Rights Campaign, to support the human rights themes of the original song.” 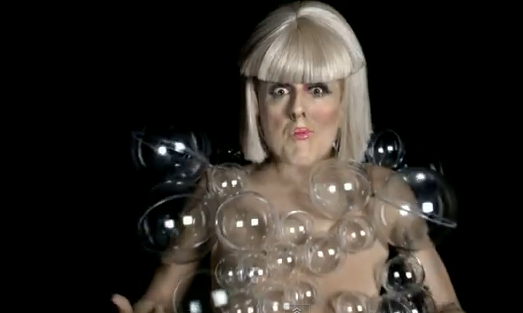 Weird Al dressed up for his Lady Gaga spoof.

While I cannot recall exactly when I first heard Weird Al’s songs, I do know what solidified me as a fan:  the song White & Nerdy released in 2006. I’d never heard the song by the original artists (Ridin’ by Chamillionaire and Krayzie Bone)  but White and Nerdy captured the imagination of our whole family. My daughter would sing it around the house, complete with hand motions and facial expressions; my son was amused by the lyrics which included a reference to the game “Dungeons & Dragons” – something he played with his white and nerdy friends. And the video… well, if you see nothing else of Weird Al’s be sure to watch this because it’s hilarious!

Weird Al mania peaked for our family on August 26, 2008 when the four of us (me, hubby, son & daughter) trekked to the Evergreen Fair in Monroe, Washington to see the artist in concert. As it turned out, that August was a rainy, awful mess and the concert was played in a downpour.

But it was all good for us as we had NOT purchased the most expensive seats in the outdoor arena but were up just high enough to have a roof over our seats. There was something ironic – and very appropriate for Weird Al – that we were high and dry while the folks who had forked out the bigger bucks endured the deluge.

The concert was worth it all. Al and his band danced and sang for at least two hours, entertaining the crowd with his manic energy, costume changes, multimedia presentation, and sense of fun.

For me, the best part was the hubby and I getting to cross generational lines with our kids. We all walked away from the concert that night with big smiles and a shared experience. Thanks Weird Al. You’re the best!

As always, a few links. On every album he’s released (except his first) he does a medley of popular songs in Polka style utilizing the accordion. Hilarious. This is the first such release:

Although this video was not from the ESF in 2008, it does show the energy he brings to a live performance. This was in New Hampshire in 2010.

Of course, no Tuesday Newsday would be complete without a link to the Infallible Wikipedia: