It is a slogan all Americans of a certain age are familiar with: Things Go Better With Coke. Except for in 1985 when there was a brief period in time when the world shook on its axis and consumers rebelled against  what was branded as “New Coke.”

The controversy began in April that year when Coca Cola replaced the original formula with the new version in an effort to regain some of its lost market share to Pepsi.

“By 1985, Coca-Cola had been losing market share to diet soft drinks and non-cola beverages for many years. Consumers who were purchasing regular colas seemed to prefer the sweeter taste of rival Pepsi-Cola, as Coca-Cola learned in conducting blind taste tests. However, the American public’s reaction to the change was negative, even hostile, and the new cola was considered a major failure. The company reintroduced Coke’s original formula within three months of New Coke’s debut, rebranded as ‘Coca-Cola Classic’, and this resulted in a significant gain in sales. This led to speculation by some that the introduction of the New Coke formula was just a marketing ploy to stimulate sales of original Coca-Cola; however, the company has maintained that it was a genuine attempt to replace the original product.”

The history of the soft drink is, primarily, a tribute to marketing and also the use of corporate profits to acquire multiple business lines. Although its current rank on the Fortune 500 is at 87 (down from 64 in 2017), it will celebrate 100 years as a publicly traded company in September 1919.

For me, as a child, there really were only three choices in ‘soda’ or ‘pop’ as we called it: Coke, 7-Up, and Root Beer. Root Beer was a special treat as we occasionally drove to the A&W drive in and got a frosty mug of the treat, sometimes as a float. And I was never a big fan of 7-Up.

But Saturday nights always involved getting to drink Coke while we ate popcorn and played a game my parent’s called ‘DeVore Rummy.’

The game was six hands of cards where you collected, first, two groups of three cards; then a group and a run of four (all the same suit); then two runs. After the halfway point, things got more difficult with needing to acquire two groups and a run, then two runs and a group and, finally, two groups AND two runs plus you had to lay your entire hand down – with no leftovers –  to win the round.

I have several distinct memories of playing the game. First, as a seven year old, tossing down my cards in frustration as I lost (yet again) and stomping away from the table in tears.

Then, as a teenager, not understanding that family game night was an important event, designed to keep us at home and provide an excuse for our friends as to why we were not out partying like so many were.

By the time those teen years rolled around, as the youngest of four, I was frequently the only child still around on Saturday nights; when in 9th and 10th grade, my friend Pam was fixture at our house. We  added Pinochle to the mix as she and I both wanted to learn so many a night that was what was on the menu instead of Rummy.

But the other things never changed. I can still see my dad, standing at the avocado green electric stove, a large aluminum pan with a wooden handle in front of him. He’d cover the bottom of the pan with vegetable oil and, when he deemed the oil hot enough, put in three popcorn kernels and covered the pan with an aluminum pie plate. I have no idea what happened to the original lid and it had been gone for as long as I could remember.

We’d wait for the telltale pop-pop-pop as the kernels would bounce up against the aluminum pan. It was then he would add the rest of the kernels. Soon, with our heaping bowls of salted and buttered popcorn, and the always present glass of Coke, we’d gather round the dining room table for the games. 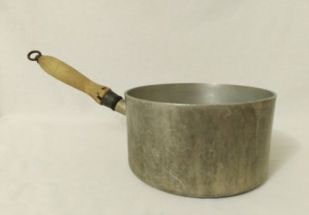 Over the years I grew to love the event – whether with my own parents, siblings, husband, kids, nieces, in-laws – for the wonderful gathering it is. And I no longer stomp from the room but instead, win or lose, value the time spent with family. And I always make sure there’s a bottle of Coke (or Diet Coke) in the fridge for those who want it.

And for the exhaustive history of the company:  https://en.wikipedia.org/wiki/The_Coca-Cola_Company

I cannot find the exact rummy game we played, so it must have been a family variation, but here’s a link to a variety of such games: