Take A Walk On The Boardwalk 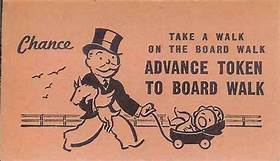 The moment you draw a Chance card that says  “Take A Walk On The Boardwalk” probably one of two things happen:

You’re either giddy because now you can buy the iconic Monopoly property; or you’re in despair because the rents will wipe you out.

The game, which was first published on February 6, 1935, is – I think – a rather polarizing experience.  Monopoly was, according the infallible Wikipedia:

“derived from The Landlord’s Game, which was created by Elizabeth Magie in the United States in 1903 as a way to demonstrate that an economy which rewards wealth creation is better than one in which monopolists work under few constraints and to promote the economic theories of Henry George and in particular his ideas about taxation. It was first published by Parker Brothers in 1935. The game is named after the economic concept of monopoly—the domination of a market by a single entity. It is owned and produced by the American game and toy company Hasbro.”

People who play the game seem to either love it or hate it. And it’s easy to see why they hate it. It pits players against each other who are encouraged to rejoice at another player’s bad luck. Many a monopoly game has ended with an overturned board and scattered money and properties.

Which seems appropriate since the a friend of Magie’s, Charles Todd,  introduced the game to one Charles Darrow – who took the game and began selling it as his own. Also from Wikipedia: 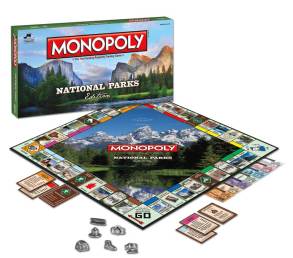 “According to an advertisement placed in The Christian Science Monitor, Charles Todd of Philadelphia recalled the day in 1932 when his childhood friend, Esther Jones, and her husband Charles Darrow came to their house for dinner. After the meal, the Todd’s introduced Darrow to The Landlord’s Game, which they then played several times together. At that point the game was entirely new to Darrow, and he asked the Todd’s for a written set of the rules. After that night, Darrow went on to utilize this by distributing the game himself as Monopoly – an act for which the Todd’s refused to speak to Darrow ever again.

“After Darrow had excellent sales during the Christmas season of 1934, the Parker Brothers bought the game’s copyrights from Darrow. After finding Darrow was not the sole inventor of the game, Parker bought the rights to Magie’s patent.”

I often played the game as a child but found the hours long commitment to be more than was enjoyable. Not to mention that I simply was not cutthroat enough to be merciless to my opponents. The early parts of the game – going around the board and buying properties – is fun but once those houses and hotels start getting erected… well, that’s a good time to end it. 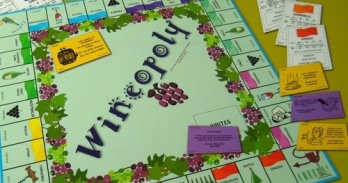 In cleaning out our game cupboard recently, we came across several versions of Monopoly including one based on National Parks and also on Wineries. There are also city, state, international and specialty versions of the game. We asked our children if they were interested in the one’s we have. While the oldest said no, our daughter seems to love the game, and is slated to get the various versions the next time she has a way to transport them to where she lives.

For my part, if I never play Monopoly again I can live with that.

Here’s a link to the article about the game and, believe it or not, a separate page to tell you all about Rich Uncle Pennybags!