A history of the humble coin

See a penny, pick it up… All day long you’ll have good luck.

Which is especially true on May 23rd, National Lucky Penny Day!

Most everyone has, I would imagine, found a penny on the ground. Some people will only pick up those where Lincoln’s image is face up believing that it’s actually bad luck to pluck a penny which has been laying face down.

I don’t go with that because any day I find money on the ground is a good day.

Whenever I find a coin I look at the date and then I like to think about significant life events from that year.

you might imagine, gone through some changes over the years. Until 1857 it was composed of one hundred percent copper. The amount of copper was reduced over time in an effort, partially, to keep the amount of copper in it equivalent to the value of the coin. Another reason for less copper was that the metal became a very valuable commodity for the production of weapons.

For a time they were made of bronze, brass, and even steel during WWII. Today’s coins are a combination of copper and zinc and the metals in them are worth more than the face value of the coin.

Did you know that until 1857 a penny was about the same size as today’s Susan B. Anthony dollar coin?

And, of course, the designs have varied over the years with today’s Lincoln head penny being the standard since the Centennial of his birth in 1909. In the past few years the obverse has changed and special set of four coins were struck in 2009 in honor of Lincoln’s birth bicentennial. From the infallible Wikipedia: 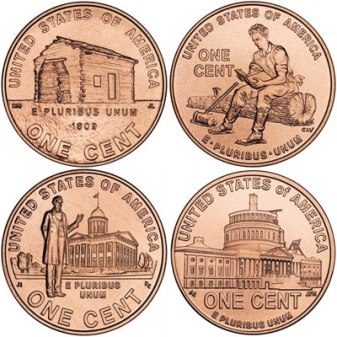 The Lincoln Memorial design was permanently retired and, following the special 2009 mint, the Union Shield in now the obverse design.

So if you find a penny on the ground today, pick it up. It might just bring you luck!

To read more about the penny, click here https://en.wikipedia.org/wiki/Penny_%28United_States_coin%29