Long before Hallmark introduced their line of annual Christmas ornaments, another American Company  had taken the market by storm, selling millions of baubles every year from 1940 to 1962. Marketed as Shiny Brite, the distinctive green boxes which featured Santa Claus shaking Uncle Sam’s hand were a fixture in the average home of the 1950’s and 60’s.

The story begins in 1937 with importer Max Eckhardt who, seeing the clouds of war encroaching and feared that his supply line would be cut, went to the Corning Glass company in Pennsylvania and made a deal with them to begin producing ornments. Thus was born Shiny Brite. From the Infallible Wikipedia:
“Eckardt had been importing hand-blown glass balls from Germany since around 1907, but had the foresight to anticipate a disruption in his supply from the upcoming war. Corning adapted their process for making light bulbs to making clear glass ornaments, which were then shipped to Eckardt’s factories to be decorated by hand. The fact that Shiny Brite ornaments were an American-made product was stressed as a selling point during World War II.
Dating of the ornaments is often facilitated by studying the hook. The first Shiny Brite ornaments had the traditional metal cap and loop, with the hook attached to the loop, from which the ornament was hung from the tree.
Wartime production necessitated the replacement of the metal cap with a cardboard tab, from which the owner would use yarn or string to hang the ornament. These hangers firmly place the date of manufacture of the ornament to the early 1940s. (snip)
Shiny Brite ornaments were first manufactured at Corning’s plant in Wellsboro, Pennsylvania, and continued there for many decades. During its peak, Shiny Brite also had factories in New Jersey, located in the cities of Hoboken, Irvington, North Bergen, and West New York. The company’s main office and showroom were located at 45 East 17th Street in New York city.
Shiny Brite’s most popular ornaments have been reissued under the same trademark by Christopher Radko since 2001.”
Although there were other companies which manufactured and sold ornaments in that era, Shiny Brite was by far the largest player.

My collection of vintage ornaments

As a child in the 1960’s I loved the December day when our family’s tree would be put up. I always watched as my father strung the C-7 bulbs on the branches. It seemed as though it took forever for my mother to declare the moment when the ornaments could be hung. Out would come the green shiny brite boxes, their lids lifted, and one by one the delicate glass balls would soon dangle from the branches.

Each year it was as if seeing old friends arrive for the holidays. By the 1980’s – with their children all moved away – my parents quit hanging ornaments on a tree. Instead, they kept an artificial tree – lights already placed on the branches – in their basement storage room. Mid-December my dad would carry it upstairs, plug in the lights, and call it good.
The ornaments were squirreled away in a box in the storage room where they remained untouched for 30 years.
This past summer, as we worked to clean out my parent’s home after my Dad had moved to an Adult Family home, my sister and I kept waiting for the Christmas Box to be unearthed.
Finally, in late August, that day arrived. We sat on the floor and opened the ornament boxes, each picking out those we wanted to keep. Last week, after my tree was up, I went searching for my parents’ ornaments. I looked in box after box which had been stored in my garage since summer, but no ornaments.
Following a two day search, I lamented to my son that I could not find them. He, however, said he had seen them and a few minutes later produced a small box from a section of the garage where I had not looked.
Just like when I was a little girl, I opened the box and said hello to my old friends. But unlike during my childhood, I could not bear to hang them on my tree, fearful they might fall and break. Amazing how something so ordinary and familiar had now become precious and irreplacable. Instead, I placed the treasured ornaments in a bowl and, along with a pair of ceramic angels and two ceramic bells, set them in a place of honor. 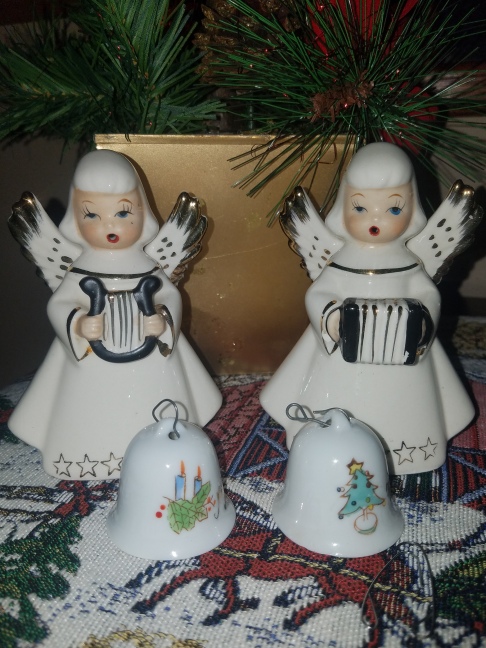 I can only hope that one day my own children will also cherish these heirlooms passed down from generation to generation.
The links:
https://en.wikipedia.org/wiki/Shiny_Brite
I loved this story about Wellsboro, PA, where Shiny Brite’s were manufactured:
https://pawilds.com/wellsboro-the-town-that-saved-christmas/
And a nice story about Shiny Brite:
https://www.retrochristmascardcompany.com/the-history-of-shiny-brite-ornaments/