These four words burst into our collective consciousness on June 11, 2002 and launched one of the most successful reality TV franchises in American History.

The show was an instant hit, showcasing the talent of people looking for their big break. Week after week fans tuned in to follow the stories of the lucky few selected to compete in the contest. The premise was, according to the Infallible Wikipedia, this:

“Each season premieres with the audition round, taking place in different cities. The audition episodes typically feature a mix of potential finalists, interesting characters and woefully inadequate contestants. Each successful contestant receives a golden ticket to proceed on to the next round in Hollywood. Based on their performances during the Hollywood round (Las Vegas round from the tenth through twelfth seasons), 24 to 36 contestants are selected by the judges to participate in the semifinals. From the semifinals onward the contestants perform their songs live, with the judges making their critiques after each performance. The contestants are voted for by the viewing public, and the outcome of the public votes is then revealed during a results segment. The results segment feature group performances by the contestants as well as guest performers. The Top-three results also features homecoming events for the Top 3 finalists. The season reaches its climax in a two-hour results finale show, where the winner of the season is revealed.”

Along with the judges, viewers at home became music critics, repeating such phrases as “that was pitchy,” and “You’re going to Hollywood.” The judge everyone loved to hate, however, was Simon Cowell, who un-apologetically skewered the singing of contests with such pithy remarks like “It was all a little bit like angry girl in the bedroom screaming on the guitar.” 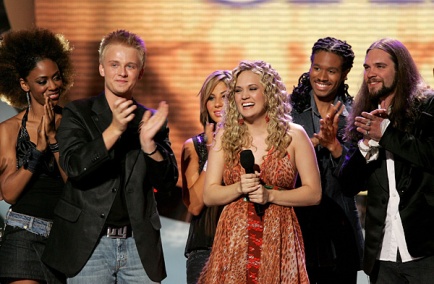 I would argue that the high water mark for the show was in 2005 with the crowning of Carrie Underwood as the winner. She has been, by far, the most successful AI alum and her win and subsequent stardom created much excitement and interest in the show. That excitement coalesced into the 2007 season with it being the number one show on TV that year. Also from the Infallible Wikipedia:

“American Idol ended the season as the top show of the 2006–2007 TV season. Its Wednesday episodes ranked first with an average of 30.02 million viewers, followed by the Tuesday episodes which averaged 29.54 million. The premiere episode became the series’ highest rated debut episode, viewed by 37.44 million viewers and receiving a 15.8/36 Nielsen rating in the Adult 18-49 demographic.”

In my household AI fever kicked in to high gear when my teenage daughter became enthralled with the show and AI took over our lives. Just before 8 o’clock each evening I’d hear the thunder of her footsteps coming down the stairs and soon we were wrapped up in the drama.

That year there was extra interest as a contestant from Bothell – six miles north of where we lived – was making a name for himself on the show.

Blake Lewis was, at the time, a local Seattle musician whose beat-boxing ability provided enough novelty that he earned a golden ticket to Hollywood. At first, it seemed, the judges viewed him as a one trick pony who would not survive the first round of performances. Week after week, however, Lewis proved that he could sing. He made each song his own with original arrangements, and defied the odds, advancing in each round.

For my 14 year old daughter and a couple of her friends, Lewis became almost an obsession like the Beatles were in the 1960’s, or David Cassiday in the 1970’s, or the Backstreet Boys in the 1990’s (It’s what 14 year old girls are known to do!)  Of course, Mom was pulled in to that universe also, as we then had to vote for him every week. And I’m not talking about dialing the phone one time and being done. Oh no. On American Idol they encouraged the viewers to vote many, many times. Hundreds of times. Once the performances were over we’d start dialing and continue until they closed them down.

When the contest is down to the final three it’s time for the ‘hometown’ visit. Or, as the cynic in me believes, just another way to market the AI franchise to the public.

In the week before Lewis was to arrive in Bothell, my daughter and her friends “L” and “D” spent a couple of afternoons making t-shirts and posters and plotting the big event. Lewis’ female fans called themselves “Blaker Girls.”

During that week I became the ‘cool’ mom. I bought the many supplies and, on a warm, sunny afternoon on May 11, drove the trio of girls to Bothell so they could see ‘their’ American Idol.  I figured there would be a crowd so we got there several hours in advance, secured a parking spot and joined the throng of over 7000.

The girls were not disappointed. The fans were amped up for the parade and, after a long wait, there he was… riding on the back of a Mustang convertible, smiling and waving to the crowd.

After the parade, we moved with the throngs down to the park where he was to perform live and receive his hometown hero’s welcome.

From the Seattle Time’s article:

The Bothell crowd of more than 7,000 was growing restless. Where was its American Idol?

Some teens chanted “We want Blake!” Others hoisted “We Ache for Blake” or “Bothell Boy, You Rock!” signs. And then, off in the distance, the twirling lights of police cars, the thundering beats of the Inglemoor Marching Band and Blake Lewis, all smiles and waves and two-fingered kisses, sailing down Main Street in a Mustang convertible with his beaming parents.

It was a highlight in a full day of events for Lewis that started at 8 a.m. at KCPQ/Fox studios for a television performance on the morning newscast. There was a lunchtime “mini-concert” at Seattle’s Westlake Center, a parade through downtown Bothell and another performance at the Park at Bothell Landing in the afternoon.”

Lewis ended up finishing second the next week, much to our disappointment.

For the next couple of years my daughter faithfully watched American Idol and even went to the American Idol tour with a friend in 2009. For me there has never been a more fun season than that one. I no longer watch the show, but for a few months in the spring of 2007, it was a magic time. Sadly, our computer crashed that summer and all the evidence of the Blake Lewis hometown visit are gone…*

*Update June 11, 2020 – During the lockdown of the past few months, I have sorted, organized, and sorted again. Lo and behold, video evidence of the visit to Blake’s Hometown parade exists! Many thanks to my nephew Chris, who put together the photos I took that day as well as found at least one I did not take. Not sure who did, but this Mom appears at the 2:19 mark with camera in hand next to the screaming teens. Enjoy!